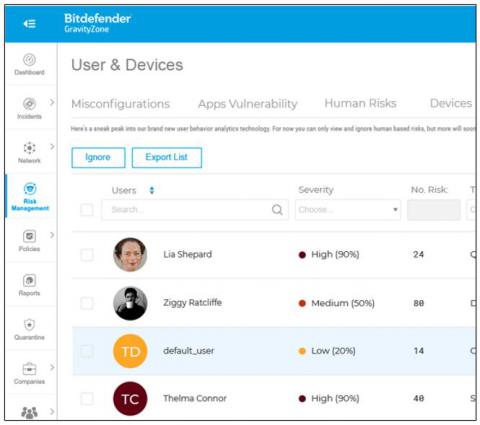 “This is kind of a blind spot in cybersecurity,” says Joe Sykora, vice president of global channels and distribution for Bitdefender.

GravityZone’s endpoint risk analytics feature, which premiered last summer, checks for misconfigured settings in operating systems and applications. The human risk analytics feature looks on a user-by-user basis for mistakes like recycling old passwords and downloading software with known vulnerabilities. Its findings, which are available through GravityZone’s centralized management console, give administrators a more complete picture of their company’s security posture while also revealing employees in need of additional security training.

“This from the MSP side of the business is very exciting, because it’s that one element that we weren’t doing in the past,” Eberhardt says.

Bitdefender introduced an MSP partner program just over a year ago in connection with a larger MSP recruitment effort.

New as well to GravityZone is a feature that uses real-time file backups to mitigate against ransomware attacks and another that allows organizations governed by regulations barring the use of cloud-based security tools to deploy the solution’s cloud-native EDR component on premises.

Bitdefender is one of many security vendors to report a massive uptick in coronavirus-related attacks against exploit fearful, disoriented users and vulnerable work-from-home endpoints. The company, in fact, recorded a 475% increase in malicious threat reports inspired by COVID-19, versus February, in the first half of March alone. The heightened need for security services stemming from those attacks, according to Eberhardt, has helped Bitdefender continue to grow despite the stalled global economy.

“It’s not a great year,” he says. “It’s crazy times out there, but when it comes to business, things are going really good.”

Sykora agrees. “Business is strong,” he says. “Cyber was one of the industries that saw definitely an increase of demand.” As a result, he continues, Bitdefender has left pre-coronavirus efforts to staff up its partner organization and roll out new partner resources largely unchanged.

“We didn’t really slow that down,” Sykora says. “Right now, we know that [partners] more than ever need more leads and they need more support from probably all their manufacturers.”

Bitdefender has offered extended payment terms to partners impacted by the recession as well. “Either people were paying them slow and or they were hit with a lot of businesses that may have gone out of business,” Sykora notes.

Since March, Bitdefender has been offering up to 12 months of free software to healthcare providers, who have been heavily targeted by cybercriminals since the start of the pandemic. Both traditional VARs and MSPs with healthcare customers can take advantage of that offer.

Last month, Bitdefender introduced a “digital identity protection” solution designed to help freelance and self-employed workers track activity by identity thieves and scamsters that could both cost them money and harm their reputation.

LG Gram for Business 17 (2020): Big Reasons to Like It
END_OF_DOCUMENT_TOKEN_TO_BE_REPLACED