ASCII Challenges Attendees to “Up Their Game” at 2018 Events 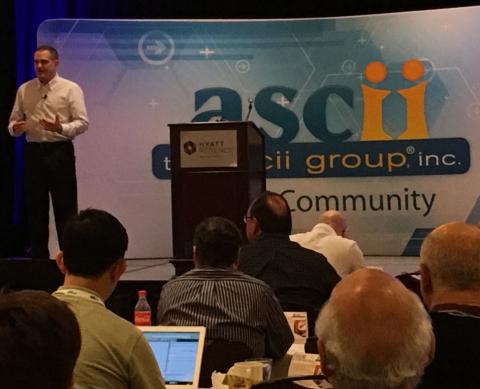 At the first of nine conferences scheduled for this year, the IT membership group called attention to the legal and security risks channel pros face today, as well as the opportunities available to them in markets like the Internet of Things. By Rich Freeman
Tweet

The ASCII Group Inc. has kicked off the latest round of its IT Success Summit live event series.

The first of nine conferences the Bethesda, Md.-based membership organization will hold in 2018 took place Wednesday and Thursday in Anaheim, Calif. All of this year’s shows are designed to help VARs and MSPs capitalize on big new opportunities and sidestep big new threats during a time of extraordinary change in IT, according to ASCII Group President Jerry Koutavas.

“The way that the industry works right now, everybody has to up their game,” he says. “We’re trying to help MSPs go beyond the standard nuts and bolts conversations that are happening in the industry and really understand more from a field perspective things that they may not expect.”

Those include legal dangers that many channel pros don’t even know threaten them. “Contracts are absolutely opening up more risks for MSPs than ever before, and it’s all because most MSPs may not use not only the right lawyer but any lawyer,” Koutavas says.

Indeed, Bradley Gross, an attorney based in Weston, Fla. who specializes in representing managed service providers, warned Summit attendees during a Thursday morning presentation that the master service agreements, statements of work, and other legal documents most of them rely on are filled with potentially business-busting flaws.

“You’re all headed for legal disasters,” Gross said before highlighting some of the contractual mistakes IT providers frequently commit. Those include making broad or vaguely worded promises that read more like marketing collateral than realistic commitments and failing to set limits on the services they provide.

“Never give away an all-you-can-eat plan,” Gross said. “[Clients] will try to take advantage of you.”

One of The ASCII Group’s members shared battle-tested advice on another issue many IT providers don’t contemplate fully until it’s too late: what to do when a natural disaster hits. Lamar Curtis, president of Houston-based IAG Business Technology, learned some lessons about that topic the hard way last year when Hurricane Harvey struck his home city, knocking six of his employees out of their homes and stripping three of them of everything they owned. Following rigorously standardized processes, Curtis discovered, can be a welcome antidote to chaos and uncertainty under such conditions.

“It adds a little stability to everyone’s life,” he said.

Security expert Theresa Payton, this year’s Success Summit keynoter, addressed the even larger, more imminent hazards that channel pros and their clients alike confront in the era of ransomware, distributed denial of service attacks, and other sophisticated threats.

“We are at war,” said Payton, the first female White House CIO during the George W. Bush administration and a former star of the CBS series Hunted who is now president and CEO of Charlotte, N.C.-based of security consultancy Fortalice Solutions LLC and co-founder of Alexandria, Va.-based network security vendor Dark Cubed.

The Internet of Things poses particularly grave perils, observed Payton, who recommended mitigating those risks by separating highly vulnerable IoT devices from the rest of a client’s infrastructure.

Jabra PanaCast Review - Get Your Huddle On
END_OF_DOCUMENT_TOKEN_TO_BE_REPLACED