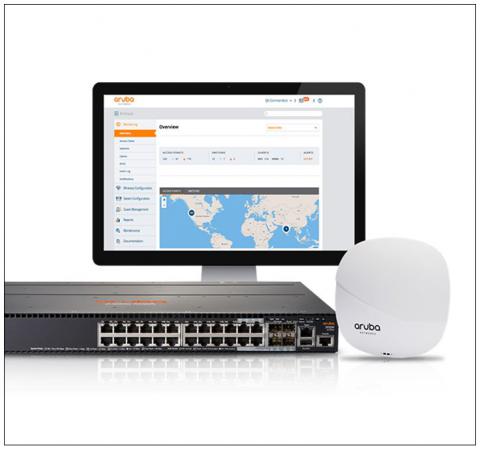 The agreement, which gives authorized partners access to Aruba’s specialized portfolio of networking and edge technologies for federal agencies via Ingram’s GSA schedule, also adds Ingram to a small circle of distributors permitted to offer those products. By Rich Freeman
Tweet

The agreement, which was announced in conjunction with the distributor’s ONE conference in Denver this week, lets Ingram resellers who are also Aruba authorized federal partners sell Aruba’s entire portfolio of networking and edge technologies via Ingram’s GSA schedule.

It also adds Ingram to a small circle of companies permitted to resell Aruba’s specialized lineup of federal solutions to channel partners. “There’s only a couple of other distributors that are authorized today,” notes Jamie Ferullo, Ingram’s director of advanced solutions.

Ingram has been offering products from Aruba, which is a unit of Hewlett Packard Enterprise, since 2013. Adding systems for federal customers gives resellers access to everything in Aruba’s catalog for the first time. According to Ferullo, that’s something authorized Aruba federal partners have been asking for.

“It’s a vendor line that they’ve been looking for us to have access to, to support their business, rather than having to steer it elsewhere,” he says.

The deal also gives Ingram partners a wider selection of products to choose from when structuring federal solutions. “We do have some other very large networking vendors currently that we support from a federal perspective,” Ferullo says. “This now presents partners with more options.”

“They’ve got a very differentiated solution allowing for multi-segmentation [and] multi-zoning, which lets them navigate between unclassified and classified [traffic],” says Celeste, who joined Ingram last week. He has held senior sales roles at Brocade Communications, Iron Bow Technologies, SGI, and DEC in the past.

Wireless networking is a major sales opportunity in the federal segment at present, according to Celeste, who says that federal buyers have been slow to embrace Wi-Fi. “Aruba was a leader in driving the adoption of wireless inside the federal community by helping validate it can be done securely,” he says.

Ingram has been pursuing distribution rights to Aruba’s federal products for several years. “We’re thrilled that we finally were chosen,” says Ferullo, who credits the success of Ingram’s Aruba Go program for contributing to that accomplishment. Introduced a year ago, Aruba Go provides sales and technical enablement resources, pricing discounts, and access to not-for-resale hardware at 75% off, among other benefits.

There are currently more than 900 Ingram partners in the program, of which roughly 200 are new additions to Aruba’s channel. According to Ferullo, the Go initiative’s success in attracting unmanaged partners without a direct sales relationship to Aruba drew the networking vendor’s attention.

“We’ve demonstrated really, really good success in that space, and I believe that’s given them the confidence to feel comfortable that we can go and execute against the Aruba federal business on their behalf,” he says.

Jabra PanaCast Review - Get Your Huddle On
END_OF_DOCUMENT_TOKEN_TO_BE_REPLACED