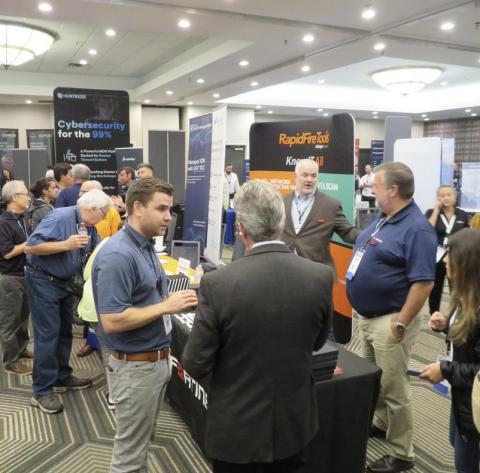 Four of the dozens of vendors exhibiting at ChannelPro’s latest in-person event—ConnectMeVoice, Gradient MSP, Quickpass, and US Signal—share updates on recent and forthcoming announcements. By Colleen Frye and Rich Freeman
Tweet

Dozens of the industry’s leading sponsors crowded the show floor at ChannelPro’s latest SMB Forum event in Charlotte. Here are some updates from four of them.

Quickpass Rolls Out New Feature for ConnectWise Users
Quickpass Cybersecurity, a provider of privileged access management and help desk security automation for MSPs, has commenced a public beta of credential injection functionality for the ConnectWise Control remote access solution. The company also announced that it has promoted Jimmy Hatzell, previously director of marketing, to vice president of revenue.

Both announcements come on the heels of a $7 million Series A investment by Arthur Ventures, finalized in June.

With the new feature, MPSs can now use the new Quickpass desktop app to directly log into remote machines using credentials stored in IT Glue, Hudu, or Quickpass Password Manager.

This is something partners have been asking for, Haskell says. “To be able to inject the credentials automatically [to ConnectWise Control] is a huge step forward and a big time saver,” he notes, explaining that this previously was a manual copy-and-paste process. “So now MSPs can actually take their credentials from inside IT Glue or Hudu or in our own password vault and spin up a ConnectWise Control instance inside of the Quickpass app. … We’re all about making MSPs not only more secure, but also more productive.”

The beta release follows a “quiet release” in Europe, which Hatzell says received positive feedback from partners. “We’re going to do a second release in full GA within the coming weeks, but we wanted to give all of our partners access to be able to request features that we can push out between now and then.”

The same credential injection feature will be offered for Datto RMM next, Hatzell says, followed by other RMMs.

Hatzell calls building a footprint for Quickpass in Europe a priority in his new role. “We’ve tripled in size in the past six months employee-wise, and we plan to continue to grow, because our partners have supported us,” he says. “Any initiatives that are coming from me or the company are all about enabling MSPs and being partner first, and we want to continue with that trend as we grow.”

ConnectMeVoice Weeks Away from Post-Acquisition Roadmap
VoIP and unified communications vendor ConnectMeVoice, which was acquired by Montreal-based voice, data, and messaging provider Cloudli Communications in June, expects to have a roadmap for the combined business communications companies in September, according to channel chief Frank Seltzer.

Until then, he adds, “partnership programs are staying the same. Commissions, compensation, everything they want about ConnectMeVoice is remaining the same,” including ConnectMeVoice personnel. Soon though, Seltzer continues, the acquisition “will mean more people, more resources, possibly new products and improved products from the Cloudli end.”

Integration with Cloudli’s fax service is a near-term objective, he adds. “They’ve got a really good fax solution that might really benefit our current partners and new potential partners.”

Unlike ConnectMeVoice, which sells only to partners and agents, Cloudli is not 100% channel and sells direct as well. Seltzer says the ConnectMeVoice by Cloudli line will remain channel focused.