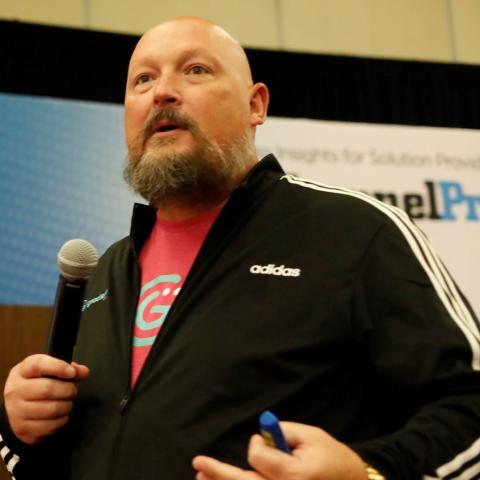 After hitting a milestone of 500 MSP partners, Gradient MSP is keeping the pedal to the metal with its integration program, service plan, and community outreach. By Colleen Frye
Tweet

Mailprotector has integrated its email security software with Gradient MSP's Billable billing reconciliation solution and Synthesize integration platform for the IT channel ecosystem.

Mailprotector follows the May integration rollout with Liongard, a data automation platform for MSPs.

The Liongard integration was a collaboration largely driven by Gradient, according to Tim Coach (pictured), the vendor’s “director of kickass MSP," in a conversation with ChannelPro at this week’s SMB Forum event in Dallas. Through the Synthesize program, Mailprotector “invested their development time, their people, their efforts to build that out, and then, of course, worked with us to make sure that everything integrated properly. So, when we're building integrations, we're not just talking about Gradient MSP dumping tons of man hours and development hours into making things work. It's actually the vendors, too, that are seeing the value of the solution. And they're putting their own time, money, and effort into being part of the Gradient ecosystem.”

New as well from Gradient MSP this week is a Pro service plan that provides MSPs with unlimited integrations to Billable for $99 a month.

As a result, “we're currently reconciling $1 billion worth of business on a regular basis,” says Coach. “Out of that $1 billion, there's over 7 million subscriptions that are being reconciled every month. So that is immense news for our partners. And it's immense news for the industry, because that shows quite honestly the faith that the MSPs have in not only Gradient, but the history of Gradient and how the company's been built.”

Coach says that Gradient is focused on industry-led growth, and just had its second Partner Advisory Council meeting. Formalized in April, the PAC currently has eight members and Coach says the plan is to expand the group to 12 to 15.

Expect the formation of a Vendor Advisory Council too some time this year, he says, an effort that will be spearheaded by Andrea Ayala, director of technology alliances.

Next week, Gradient will launch New Kids on the Flock, a peer community program for newcomers to the IT channel created by Morgan McBride, channel engagement champion. “We saw that there wasn't really a space for new kids and new people and learning the space,” she explains. “So, we wanted to change that and create a little community for everyone [where] you can learn about what your first trade show is going to be like or how to public speak and build relationships within the channel.”

McBride says the group will have a monthly webinar as well as Facebook and LinkedIn groups “where we can all come together, ask questions, be engaging, and support one another.”