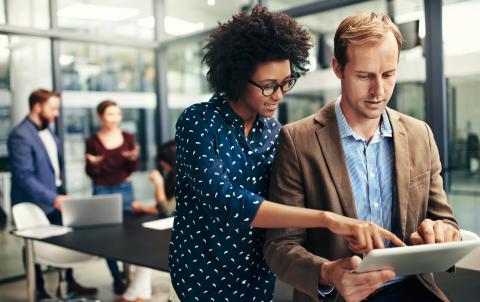 Mentoring from experienced managers has long been a way to advance careers and develop leaders, which is why it’s important for all employees to have access. By Carolyn Heinze
Tweet

BEHIND MANY A SUCCESSFUL PROFESSIONAL is at least one good mentor. The hard-earned wisdom they provide guides mentees along their career path, and enables them to heighten the value they bring to their organizations. Women and minorities, however, often have more trouble than their white male peers finding and establishing relationships with mentors.

“Part of the reason is there is a small number of minorities in executive leadership positions,” says Elisee Joseph, an associate in professional studies at Columbia University.

Women in IT have lacked role models as well, which is why three women in the Washington, D.C., area created the Mentor-Protégé Program, explains Beth Bierdan, a communications engineer at Decisive Point Consulting who heads up this offering from the nonprofit advocacy group Women in Technology. “Especially in the D.C. area there just are not many women in senior positions, and so if we can start [mentoring] when they’re in their early or mid-career maybe we can have more women in senior positions in technology companies.”

It’s important to note that mentorships differ from executive coaching relationships. Lisa Z. Fain, CEO at the Center for Mentoring Excellence, a coaching and training firm based on Mercer Island, Wash., says that executive coaching is generally short term, and focused on increasing performance in a given area. For instance, a coaching client may seek guidance on the steps involved in charting a five-year vision for his or her career path.

Mentoring, in contrast, is more developmental and longer term. “The mentor might share some wisdom and experience, but it’s really driven by the mentee,” she says. “And it’s more about inquiry and looking at possibility.” For example, that exchange might focus on exploring when it makes sense to start charting that five-year vision. While the coaching relationship ends when a particular issue is resolved, mentorships are often ongoing.

For women and people of color struggling to find a mentor in the IT industry, Joseph suggests branching out by seeking a mentor in another field, adding that his own mentorships involved professionals working in technology, finance, academia, and sports. “I would advise those who need mentorship to broaden their spectrum and make sure they are tapping into different industries so that they can get a better understanding of what they want to get into in the future.”

Jabra PanaCast Review - Get Your Huddle On
END_OF_DOCUMENT_TOKEN_TO_BE_REPLACED