ICYMI: Our Channel News Roundup for the Week of September 5th 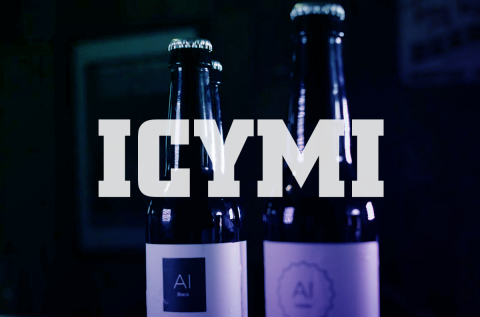 Apple’s latest batch of new products, reports of pending “efficiencies” (as in layoffs) at the new Dell Technologies, and the arrival of intelligent beer are all among the stories we didn’t get to this week. By Rich Freeman
Tweet

Enjoy your three-day break? Great! Easing back into the post-summer grind? Good for you! As for us here at ChannelPro, we pretty much went straight from a drip, drip, drip of news on Tuesday to a downpour on Wednesday, with Dell (ahem, make that Dell Technologies), Intel, and Hewlett Packard Enterprise all breaking big merger-related stories.

And while we got you all of them, I’m forced to admit we’ve been coasting our way to the weekend ever since. I mean, if we wanted to work for a living we wouldn’t have taken these cushy media jobs, right?

Anyway, had we been willing to break a sweat for a change, there are a few additional stories we would have told you about this week.

Like say, that big Apple product launch that was all over the headlines. Yeah, mums been the word here at ChannelPro on that for the most part, and evidence suggests many of you may not mind. In the interest of keeping up with the Joneses, though, we’ll mention that as more or less everyone and their uncle predicted Apple introduced two new headphone jack-less iPhones with fancy cameras, improved battery life, and water/dust resistant cases, plus a new Apple Watch with a brighter display, onboard GPS, and a dual-core processor.

About that watch: I assume we’re not the only ones to come away from Wednesday’s festivities noting that what was once supposedly the Next Big Thing in mobility is starting to look a little like a glorified, somewhat pricey Fitbit, what with all the emphasis on the new Apple Watch’s health and fitness features, not to mention the Nike+ edition of that device. (On the other hand, who but Apple would create a Hermes edition smartwatch (pictured) with prices starting at $1,149?)

Anyhoo, tempus fugit. Because there was a tempus in the not so distant past when the arrival of a new iPhone meant giant buckets full of cash were about to start making their way into Apple’s coffers. But with iPhone shipments in decline and Apple itself apparently less than confident about the new device’s first-weekend sales, some shareholders have apparently decided to pull the rip cord: Apple’s stock price had dropped 2.29 percent between first thing Wednesday and now as of press time for this piece.

That didn’t take long. Remember that story about the Dell-EMC merger we mentioned before? We neglected to say anything in it about a pledge Michael Dell made during the press conference celebrating the completion of that deal: “We’ll drive efficiencies across our entire family of businesses.” We all know what “efficiencies” usually means after a merger, and sure enough that appears to be the case here as well.

We missed something kinda important about Intel too. They didn’t just spin off their security product unit this week. They also acquired Movidius, a maker of specialized processors that add “visual sensing” capabilities to Internet of Things solutions. They should make a nice complement to Intel’s RealSense computer vision technology, and offer further proof that the new Intel is getting out of tangential or receding markets and zeroing in on strategic ones.

And no, Microsoft, we haven’t forgotten about you. You just didn’t do a whole lot this week. Saving up all the good stuff for your Ignite event at the end of the month, aren’t you? In the meantime, we’ll content ourselves with the addition of guest access functionality to Office 365 Groups, which should make collaborating with customers and partners and the like easier, as well as an update to Azure SQL Database Advisor that reduces the wait for index tuning advice from a week to a day.

We haven’t forgotten about you either, vendors not named Microsoft. We’re perfectly aware that you had noteworthy news this week too. For example:

Vendors! They do the darndest things. This week, for example, when they weren’t sending forth new products they did things like this:

Just in time for football season! In case further evidence was needed that artificial intelligence is slowly ruining everything good in life, we learned this week that it’s begun mucking around with America’s favorite game-time libation. That’s right, IntelligentX has begun brewing a line of what can only be called DevOps beers whose recipes are iteratively adjusted based on consumer feedback analysis performed by “complex machine learning algorithms.” Thank goodness there’s an experienced brewer to veto the beerbot’s suggestions if a determined bunch of mischief makers opts to flood the system with requests for an IPA that tastes more like road tar.

Meanwhile, the experts at Kaspersky Lab helpfully pointed out that if the refrigerator containing your favorite game day snacks isn’t spying on you already, it probably will be soon. With smart, sensor-equipped models like the Samsung Family Hub now reaching market, it’s only a matter of time before your seemingly innocent fridge starts letting your health insurer know that it contains nothing but nacho fixings and AI-influenced beer.