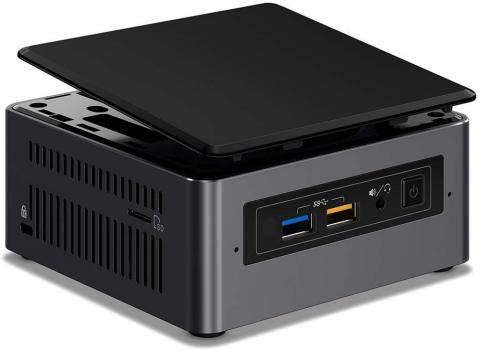 From conferencing solutions to digital signage systems to data collection at the North Pole, these mini-PCs are showing their might. By James E. Gaskin
Tweet

INTEL'S COMPACT NUC (for Next Unit in Computing) mini-PC is just 4.6 x 4.4 x 1.55 inches on the outside but has all the power of a full-size PC tower, including models with high-end graphics processors. In the hands of creative system builders, the little box is powering a variety of solutions, from the mundane to the remarkable.

SimplyNUC, for instance, manages thousands of variations for its customers, according to John Deatherage, chief marketing officer of the Round Rock, Texas, company that started life as an integrator and is now about 50% channel. Every different configuration of processor, memory, storage, port, and graphics processing has its own SKU. For customer convenience, SimplyNUC also carries mice, keyboards, monitors, and other accessories. "We can package a NUC exactly the way a customer wants, from logos on the outside to processors and RAM and storage on the inside," Deatherage says.

SimplyNUC’s best-selling unit is the AirServer. Used in meetings rooms, it runs a Wi-Fi hotspot and software that can mirror images from any mobile device to a big screen. Another common application for the NUC is powering Zoom Room audio and videoconferencing solutions, Deatherage says.

Visual signage is one of the most popular applications for EWC Technologies, a small startup in Salt Lake City that has sold close to 10,000 NUCs. For example, all visual signage at Texas Christian University in Fort Worth is powered by EWC NUCs, according to Nino Vanich, CEO. He says the company’s standard build is an Intel i3 or i5 processor with 128GB or 256GB of NVE storage.

A new product line for EWC stemmed from an unusual request. "Trade show customers asked us to build a NUC powered by PoE that could run their kiosks and displays. Using PoE, they could avoid paying union electricians at trade shows." Soon EWC will up the power to 90 watts to run NUC mini-computers. PoE can power the NUCs, which in turn power monitors and other devices.

Similarly, in the Sinclair Hotel, a Marriott Autograph property also in Fort Worth, almost everything in the facility runs on PoE, including lights, AC units, window shades, and even the minifridges. All devices are controlled through various NUC boxes from EWC.

Jabra PanaCast Review - Get Your Huddle On
END_OF_DOCUMENT_TOKEN_TO_BE_REPLACED