The Charity Beard Shave, which has a goal of raising $100,000 for five nonprofits, will have numerous channel personalities facing the barber at IT Nation Connect in November. By Colleen Frye
Tweet

Chances are, you know someone who, while hunkering down during the darkest days of the pandemic, did one of the following things: adopted a puppy (or iguana), stopped wearing pants, or grew a fierce, full mountain man beard. Chances are, you also know one of the channel personalities who have pledged to shave off those awesome (awful?) beards for charity during ConnectWise’s IT Nation Connect 2022 conference in November.

The Charity Beard Shave has a goal of raising $100,000 for five nonprofits, with each receiving $20,000. If the goal is hit, the “shavees” will hit the barber’s chair at a designated high-traffic area at IT Nation Connect. The schedule and details are still in the works.

Ian Richardson, managing partner of Richardson & Richardson Consulting, an MSP coaching firm, says the idea for the fundraiser originated at last year's IT Nation, when his wife and business partner, Carrie Simpson, asked Matt Lee, senior director of security and compliance at Pax8, what it would take for him to shave his beard.

Turns out, his answer was he’d only do it for a charitable event that would make a significant impact. They shook on it, and Simpson went on to recruit a lineup of bearded volunteers in cybersecurity and the channel. The Charity Beard Shave started to fall into place, with a list of five nonprofit beneficiaries.

“There's been kind of a lean towards tech and especially inclusiveness and diversity in tech,” says Bob Coppedge (at right, below), a volunteer shavee and CEO of Simplex IT, about the selection. “Essentially those of us who are losing the follicles, I think we've been able to say, hey, ‘let's look at this charity or that charity.’ And so far, I think the choice has been great.” 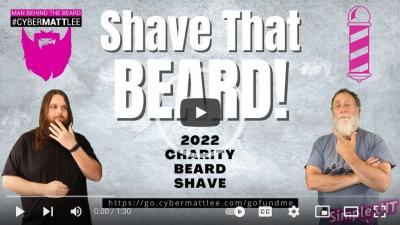 Other bearded volunteers include Vince Crisler, Jason Slagle, Mike Jones, and Sean Lardo, who joined ConnectWise in January as evangelist for the ConnectWise economy.

“You've got a lot of people who are pitching in to make this happen,” including both corporate and individual donors, Coppedge says. “And then you've got all these really great nonprofit organizations who are going to benefit from it. … You've got like four levels of win.”

As of September 22, $64,640 had been raised from individuals and companies, including a $15,000 commitment from ConnectWise, which is also providing free space, promotions, and logistical support for the event, says Richardson, who hopes to exceed the goal.

Supporting philanthropic efforts is nothing new for ConnectWise, according to Lardo, who brought the charity shave to the attention of Andrea Barrow, Invent team manager at ConnectWise. “She made it happen where we became heavily involved as an organization,” says Lardo, adding that “it's nice to see the community coming together, and we feel privileged that they asked to do it with us and be part of it.”

ConnectWise and Channel Program Team Up to Give MSPs a Say in Selecting PitchIT Competition Finalists
August 24th, 2022

Channel’s Bearded Men to Shave It All Off for Charity
September 28th, 2022