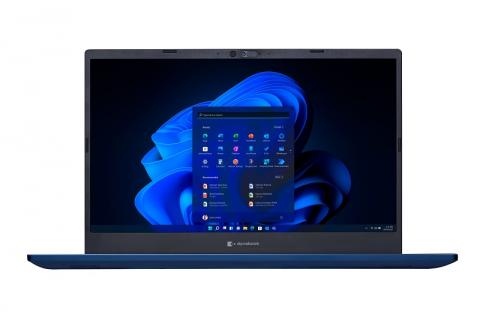 The business notebook’s build quality, speed, storage, and keyboard earn high marks, but the display and webcam less so. By Matt Whitlock
Tweet

AS A TECH JOURNALIST, computer enthusiast, and all-around hardware junky, I’ve gone through my fair share of notebook computers.

Two specific notebooks from Toshiba, a name once synonymous with mobile computing, played a notable role in my mobile computing history. The first was a Toshiba Satellite Pro 400CS from the mid-’90s running Windows for Workgroups 3.11. Not exactly svelte by modern standards, but its color screen, integrated pointing device, and fast (at the time) Intel Pentium processor showed me that portable didn’t have to mean limited. The second, a Protégé Z930 Ultrabook, remains one of the lightest and sleekest notebooks I’ve ever owned.

What was Toshiba Client Solutions today goes by Dynabook, now a subsidiary of Sharp, which is majority owned by Foxconn (you followed all that, right?). While the Toshiba name may be gone, Dynabook wears its history like a badge of honor, carrying forward with a lot of the same product lines such as Satellite Pro and Tecra. Is it business as usual, or has all the changing hands and corporate restructuring resulted in products that radically depart from its namesake?

No better way to find out than to put one to the test, and Dynabook was kind enough to send over a Portege X40-K1437 to put through its paces.

The X40-K’s most contentious feature will undoubtedly be its dark-blue aluminum chassis. The lid is sharp looking, sporting a silver embossed Dynabook logo on a metallic-looking blue lid that can fold back 180 degrees. The lower body retains the dark-blue color but not the same material style as the top, which feels a little like plastic and gives it an almost toy-like appearance. Both the top and body are prone to showing fingerprints, but the dark color keeps them less noticeable. The display bezel and keyboard are both black, which adds some visual interest against the dark blue (Figure 1).

Those not in love with the color may better appreciate its ability to withstand the daily grind. The chassis meets MIL-STD-810H testing standards for strength and durability. The extra strength can be felt in its weight, 3 lbs., 4.5 oz. according to my scale. This is nearly a pound heavier than the Protégé Z930 mentioned earlier but in line with MIL spec business-premium notebooks from other OEMs. When closed it’s a svelte 18 mm tall, unless you include the oddly large rubber foot, which puts it closer to 23 mm overall (Figure 2).

Looking around the sides of the X40-K will please most business users who like to plug things in without breaking out adapters (Figure 3). The left side sports a combined headset/microphone jack, a USB 3.2 Gen 1 port, full-size HDMI, two USB 4.0 Type-C ports with Thunderbolt, and a barrel power connector. The right side rounds out the buffet of modern connectivity with a microSD card reader, a second USB port, Gigabit Ethernet, and a Kensington Lock port.

The addition of a barrel connector surprised me since the unit ships with a USB-C power adapter. I don’t want to sound like a hypocrite, given that I generally support the ongoing standardization effort to USB-C for power ports, but if the unit is going to ship with a separate power connector it may as well include the adapter to free up one of the USB-C ports for other uses.

The X40-K is rounded out with Wi-Fi6E, Bluetooth 5.2, TPM 2.0, multi-touchpad with integrated fingerprint reader, Intel UHD graphics, and 720p webcam with privacy shutter.

Modern-day notebooks are mostly defined by their screen, which in this case is a 16:9 14-inch IPS-LCD display with a FHD resolution of 1080x1920 and a peak brightness rating of 250 nits. As far as IPS-LCD screens go it’s serviceable for everyday indoor productivity, but its limited color space and low peak brightness is a step down from what one would expect in a premium notebook.

The top and side bezels are narrow enough to keep the physical dimensions in line with other 14-inch notebooks in this class, though one could make the argument there would have been enough space for a 16:10 display.