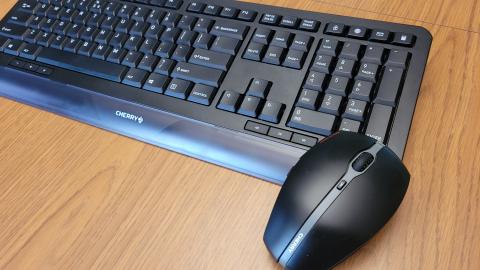 Cherry is known for making some of the best mechanical keyboard switches on the market. You won’t find those here though, as this keyboard is built with elastomer dome membrane switches to reduce cost and allow for quiet operation in an office setting. The keys themselves feel a bit stiff at first, requiring a fair amount of pressure to activate, but depress and snap back into place quietly enough to keep co-workers happy. There’s far more key travel compared to a low-profile or notebook board, but the result is a typing experience that feels springy and responsive. Oddly, a few keys felt mushier than the rest, notably the spacebar, enter, and right shift keys, though it wasn’t enough to hinder what was otherwise a pleasant typing experience overall.

Cherry says it’s good for 10 million keystrokes, with extra-durable inscriptions that won’t wear off quickly. Rather than test that claim myself I’ve decided to make you, dear reader, my extra-special review helper. Start counting those keypresses and let me know how it goes.

The Gentix Wireless Desktop bundle debuts Cherry’s first wireless mouse (pictured right). Every entry in the Gentix mouse line shares the same body and styling, highlighted by a symmetrical design with rubberized side surfaces. They’re not all the same, however, as the line includes variants optimized with features like illumination or special no-click buttons.

From the outside, the wireless mouse closely resembles the Gentix 4K, given its six-button design, red-accented scroll wheel, and selectable resolution. However, the 4K model features a four-stage switch (800/1200/2400/3600 dpi), whereas the wireless model in this bundle is a two-stage (1000/2000 dpi). I think it’s an attractive design (to each their own), though it feels a little cheaper in hand than its keyboard counterpart.

Overall performance is excellent. Its optical sensor did a great job tracking most surfaces one would find in the typical office, though like other optical mice you’ll need a pad to use it on glass. Having some choice in sensor resolution is a nice touch for a mouse at this level, and I think most office users will be quite happy with the two dpi settings offered. The left, right, and wheel buttons take just enough pressure to activate, and while not silent, aren’t loud enough to annoy those within earshot. The scroll wheel itself is coated with rubber for improved grip, which made rolling up and down webpages and spreadsheets easy.