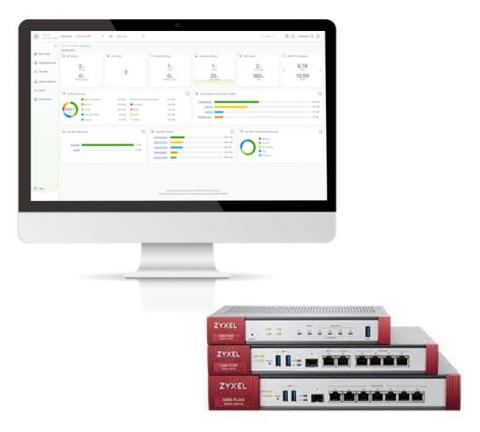 Part of a firmware update that includes functionality for work-from-home users, the new option lets companies administer devices from the popular USG line via the same interface they use to manage Nebula-compatible access points and switches for the first time. By Rich Freeman
Tweet

Zyxel Networks has added the USG FLEX line of firewalls to its Nebula Cloud Networking solution.

The new option is part of a firmware update made available today that includes multiple features useful for companies with work-from-home employees.

Though organizations that wish to can continue to manage USG FLEX devices on a stand-alone basis or via third-party SNMP management tools as before, using Nebula instead allows them to administer security appliances through the same interface they use to oversee Nebula-compatible access points and switches.

“It’s really valuable because they have a single pane of glass for all of their customers and organizations that they can manage in one administrative account,” says Tri Nguyen, Zyxel’s manager of business networking products.

The USG FLEX family is the first set of appliances from Zyxel’s popular USG portfolio supported by Nebula since the cloud solution’s debut in 2016. Zyxel has changed Nebula’s name to Nebula Together to reflect its expanded capabilities.
Included as well in ZLD 5.0, the USG FLEX update introduced today, is secure Wi-Fi functionality that establishes encrypted VPN tunnels between remote sites and a USG FLEX firewall at headquarters via a Zyxel access point. According to Nguyen, companies can use that feature to apply the same security policies in effect at their main office to work-from-home offices as well.

“All the traffic that flows through the access point actually flows through the company network,” he says. “All the security settings and parameters on the gateway in the office now are extended to the home user.”

New zero-touch functionality in Nebula now allows technicians to pre-configure an access point by scanning a QR code on the exterior of its box using the Nebula app before sending it to a remote user.

“You literally ship the box without even having to open the box,” Nguyen says. “All the employee has to do is literally plug it in and all the security parameters that the company has are automatically applied to all the traffic that goes through that security gateway.”

ZLD 5.0 also comes with dynamic pre-shared key technology that lets users segment multiple devices attached to a shared SSID in dedicated VLANs. Apartment buildings, for example, can use that feature to give each renter a secure, exclusive network connection for all of their IP devices without assigning them each an exclusive SSID.

“You don’t have to use SSID one for family one and SSID two for family two,” observes Nguyen, adding that hotel operators can use the same functionality to provide safely segregated VLANs to multiple guest rooms through a single wireless network.

To encourage users of earlier USG appliances to upgrade to newer FLEX products, Zyxel is offering USG FLEX hardware free to companies that buy a two-year license for the associated unified threat management security software within the next two months. Current UTM subscribers also now get free access to Nebula for the duration of their contract.

The first three USG FLEX models reached market last summer, and two more arrived in November. According to Zyxel, the firewalls provide up to 125% of the system performance and up to 500% of the unified threat management performance of earlier USG models. ChannelPro reviewed the USG FLEX 100 earlier this year.

Microsoft Channel Chief to Unhappy NCE Newcomers: “We Are Listening”
Where to Catch Sherweb In Person in 2022
Canadian Tech Predictions for 2022: From Collaboration to Virtual Desktops
END_OF_DOCUMENT_TOKEN_TO_BE_REPLACED

LG Gram for Business 17 (2020): Big Reasons to Like It
END_OF_DOCUMENT_TOKEN_TO_BE_REPLACED