WPC 2013: Office 365 and Cloud Will Be the Big Winners for Microsoft and Partners 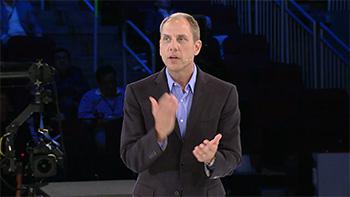 Microsoft confirmed that Office's transition to the cloud is proving very successful for both itself and its partners. By Matt Whitlock; on-scene reporting by Joel Zaidspiner
Tweet

During the opening keynote at the 2013 Worldwide Partner Conference in Houston, Microsoft confirmed that Office's transition to the cloud is proving very successful for both itself and its partners. According to the company, Office 365 is the fastest growing product at Microsoft.

Microsoft referred to Office 365 as a "high reliability cloud application," referring specifically to hosted versions of Exchange, SharePoint, and other products in the business SKUs. Thinking of Office as a cloud application may confuse those more familiar with Microsoft's popular and affordable home offering that provides access to the full Office Professional Suite on 5 PCs or Macs for $99 per year. The business offering does combine traditional Office software in some cases, but is primarily targeted toward hosted email, document sharing/collaboration, etc.

During its keynote, Microsoft highlighted the next wave of opportunity for the channel by reiterating that Office 365 is the complete Office in the cloud, providing small business easy, affordable access to enterprise class solutions.
It also announced that more SKUs are coming to Office 365 open: E1, E3, Pro Plus, Government, and Acedemic. They also finally announced solutions for transition SKUs for customers who want to go up the 365 food chain. Before there was no good way to upgrade from one plan to another.

Microsoft drove the cloud opportunity points home with an IDC led (Microsoft sponsored) profitability study, which stated that partners putting 50% or more of their business in the cloud are growing at a much faster rate than those who aren't. According to the study, Worldwide public IT cloud spending will reach 98.4 billion by 2016. That study can be read here (warning, PDF link).

Being part of a nearly 100 billion dollar spending pool should motivate anyone to pitch Office 365, Azure, and other cloud services, particularly those channel partners focused on SMB who's client base are going to be less likely invest in on premises hardware resources going forward.

The Rise of Vertical Industry Clouds
May 17th, 2022