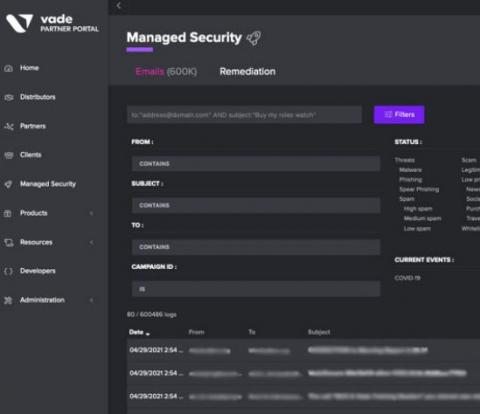 An addition to the Vade partner portal provided at no additional cost, the new system is designed to help MSPs profit from growing demand for managed security services. By Rich Freeman
Tweet

Vade Secure has launched a threat management and incident response tool for MSP users of its Vade for M365 email security solution.

Called MSP Response and available now at no extra cost, the system is an addition to the Vade partner portal that gives managed service providers multi-tenant management capabilities for the first time. According to Adrien Gendre, Vade’s chief product and services officer, it’s designed to help MSPs profit from growing demand for managed security services.

“They can create an added-value offering for their customers matching a current need of the market,” he says. Such offerings will be profitable as well, according to Gendre, because pricing on Vade’s software leaves room for margin.

“It’s extremely low cost to maintain and run,” he says.

Drawing on existing functionality in Vade’s platform, which protects roughly one billion mailboxes worldwide at present, MSP Response lets technicians view aggregated threat data from across their customer base. Though Vade for M365 and other Vade products automatically delete all instances of an infected message within a company every time it spots a malicious message, MSP Response’s incident response feature now lets managed service providers extend that functionality to all of the customers they support.

“They have the ability in just one click to search across all the other customers who also received that same attack and remediate that attack across all of [them],” Gendre says.

The system also shows administrators which end users opened a malicious email, so they can be targeted for follow-up training via Threat Coach, the phishing awareness tool that Vade shipped last September.

Vade has more features coming to MSP Response in the future. “This is really just the beginning of the vision,” Gendre says. “We want to help MSPs manage the security of their customers, and we want to automate that as much as possible.”

Slated for future release, he continues, are an API that will allow users to import and centralize log data from all of their customers for threat analysis, as well as a multi-tenant version of Threat Coach. Those and other forthcoming enhancements will be provided at no additional cost, like the functionality available today.

Vade’s managed email security initiative arrives at a time of rising need for and consumption of managed security more generally. Some 46% of participants in ChannelPro’s 2021 State of the Channel survey offer managed security at present, and another 18% plan to add it in the future. Gartner, meanwhile, expects global outlays on security and risk management technology and services to climb 12.4% this year to $150.4 billion.

The Road to Success Is Paved with Service
END_OF_DOCUMENT_TOKEN_TO_BE_REPLACED

Jabra PanaCast Review - Get Your Huddle On
END_OF_DOCUMENT_TOKEN_TO_BE_REPLACED