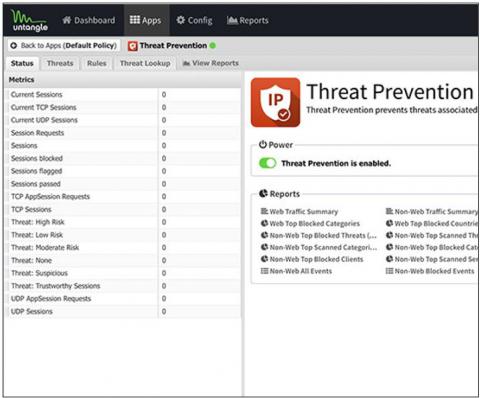 Untangle has shipped an updated edition of its NG Firewall solution with new functionality for blocking access to dangerous IP addresses.

NG Firewall 15.0, which is available now, also includes new child-specific content filtering capabilities and new customization options for the email alerts the product sends to administrators and the dangerous content warnings it displays for users.

The added IP address filtering is provided via a new Threat Prevention App. When used in conjunction with other apps previously available for NG Firewall, including its web filtering and virus blocking systems, the Threat Prevention App adds another layer of security at no additional cost. It is available only with the all-inclusive NG Firewall Complete package, however.

According to Untangle, the Threat Prevention App categorizes IP addresses as High Risk, Suspicious, Moderate Risk, Low Risk, and Trustworthy based on real-time packet inspections informed by Webroot’s BrightCloud IP Reputation Index. In addition to web pages that users are attempting to reach, the software reviews related associations, apps, and files, as well as security issues the page may have had in the past.

The app scans encrypted as well as ordinary network traffic. Attackers are increasingly hiding exploits in encrypted streams that many firewalls either can’t decrypt at all or can’t decrypt without creating significant network performance slowdowns.

Other new additions to NG Firewall in version 15 include “kidzsearch” filtering for Google, Bing, and other popular search engines. Designed for use in schools and libraries, the feature automatically screens out search results not appropriate for children.

Administrators can also now automatically flag the email alerts that NG Firewall sends them or route them to a specific folder in their email application. New functionality in the product’s web filtering app lets companies display a custom-written warning notice bearing the organization’s logo when users attempt to navigate to a dangerous site.

“SMBs don’t often have the adequate protection and fall victim of hackers and unauthorized users trying to steal information or cause damage to their systems and services,” said Heather Paunet, vice president of product management at Untangle, in prepared remarks. “As attacks on SMBs continue to increase, cost-efficient, trustworthy and scalable unified threat management solutions must become readily available for them. The release of NG Firewall 15.0 provides peace of mind to today’s network administrators. While hackers are using newer technologies and are attacking under the radar, Untangle is faster evolving to block their attacks before they even happen.”

OpenText Calls Cyber Resilience the Answer to Dangerous Times for IT
October 28th, 2020

Jabra PanaCast Review - Get Your Huddle On
END_OF_DOCUMENT_TOKEN_TO_BE_REPLACED