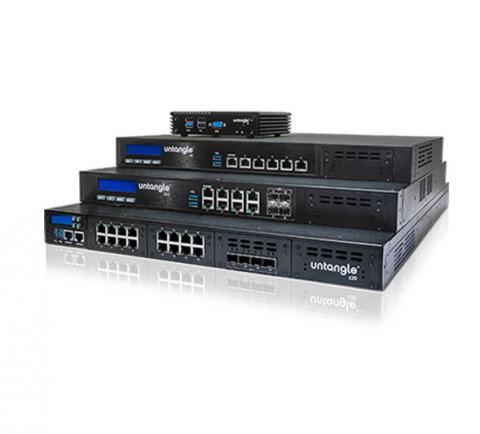 Untangle Inc. has rolled out an upgraded edition of its NG Firewall software and a refreshed line of appliances for running that platform featuring upgraded processors, faster storage, and speedier networking capabilities.

Like the earlier devices they replace, Untangle’s new zSeries appliances are designed to offer NG Firewall users a turnkey deployment option, according to Heather Paunet, the vendor’s vice president of product management.

“All they have to do is receive the box [and] turn it on,” she says. “It will just work from our cloud-based management tool at that point.”

The zSeries family, which Untangle officially launched last week, is the vendor’s first significant appliance update in years. “Our hardware has been great, but we just decided to sit down and take the opportunity to really analyze it, look at what the market wants with hardware today, and make some significant changes,” Paunet says.

The resulting devices, she continues, offer more of what users care about than their predecessors yet cost less. Untangle has reduced the number of appliances it offers from 11 to five as well to make selecting appliances simpler.

“We are significantly increasing performance, specs, options, simplifying the product line, and doing all that at a lower price,” Paunet says.

The entry-level z4 and z4w appliances are designed for use in small offices with up to 100 devices, Paunet says. Both units feature quad-core Intel Celeron processors, 4 GB of memory, a 32 GB mSATA SSD, and four network ports, twice as many as the products they replace. The z4w offers wireless connectivity as well. Pricing begins at $329 for that device and at $299 for the z4. “We have the lowest entry point on the market for a firewall at the moment,” Paunet says.

Intended for use in midsize offices and data centers, the new z6 and z12 start at $1,199 and $1,999, respectively. The former product supports around 300 devices, Paunet says, and is equipped with a dual-core Intel Core i3 CPU, 8 GB of RAM, a 512 GB solid-state NVMe storage drive, and six ports.

The z12, comes with the same 512 GB NVMe drive, but a quad-core Intel Xeon processor and 16 GB of memory, plus eight GbE ports and four SFP ports. It also offers fiber connectivity. “You could put 1,500 devices very comfortably on it,” Paunet says.

The top-of-the-line z20 appliance is optimized for campus deployments. Bearing a six-core Intel Xeon processor and 32 GB of RAM, it offers 17 GbE ports on top of the four SFP ports supported by the z12. Like that smaller product, the z20 has fiber connectivity and a 512 GB NVMe drive. It lists for $3,499 and up.

Untangle plans to retire the earlier appliances that the zSeries replaces. “We have a little bit of inventory left over that we’re running down, but for the most part as of today it’s all about the new series,” Paunet says. Owners of older appliances will still receive support, however. “We will honor the warranties that they have today,” Paunet notes.