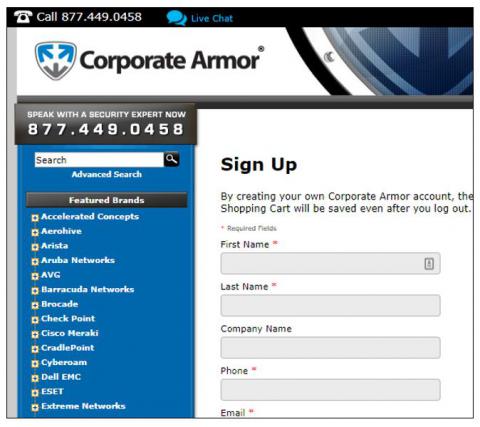 Terms of the transaction, which officially closed two weeks ago, were not disclosed.

The acquisition adds a company with longstanding ties to Fortinet Inc., Check Point Software Technologies Ltd., SonicWall Inc., and other security leaders to Temprano’s constellation of businesses and alliances, according to Luke Walling, the Newton, N.C.-based company’s founder, CEO, and president.

“It brings significant volume in lines that are very complimentary to our core product portfolio,” Walling says.

It also substantially augments Temprano’s sales and marketing capabilities, which were previously limited to traditional techniques like telesales and email. Corporate Armor operates a sophisticated, commerce-enabled website and maintains storefronts on both Amazon and NewEgg.

“We had plans in our business plan actually for next year in particular to build a digital marketing and acquisition team to expand our presence online,” Walling says. “Corporate Armor already has that presence.”

The acquisition benefits Temprano’s customers as well, he continues, by offering access to a wider set of vendors on what Walling says are more favorable terms than channel pros typically get.

“These lines will become available at a price advantage to our existing partners, but without all the traditional complexities of buying those types of products through what I’d say are pretty traditional channel programs,” Walling says, citing credit applications and added fees for credit card purchases as examples.

Founded in September 2016, Temprano serves as the North American distribution arm for Central and Eastern European software makers with little knowledge of overseas market dynamics. To date, the company has established alliance agreements with Safetica, a data loss prevention vendor headquartered in the Czech Republic, and ISL Online, a provider of remote access solutions. Offering better-known products from established vendors like Sophos Ltd. and Cisco Meraki in addition to those systems provides revenue Temprano can use to underwrite its core mission.

“Cracking the market [and] building a brand for these new entrants is very, very expensive,” Walling notes. “Giving our partners more things to buy that they already buy expands our opportunity to introduce those products to them as well.”

Just the same, he continues, Safetica and ISL Online remain the most profitable part of Temprano’s business.

“Most of the growth we’re achieving, particularly the most important growth, margin growth, is inside of this original premise,” he says.

The Corporate Armor acquisition came together swiftly, says Walling, who first became aware the company was potentially for sale in March.

“We literally fell upon it in a lunch meeting,” he says. “We closed on it rather quick.”

Walling’s target when he founded Temprano was to reach $50 million a year in revenue by 2021.

“With all of the revenues that we’ve aggregated over the last few years, we’re now on course to be—annualized—a $20 million dollar company,” he says. “I’m pretty pleased with our success.”