For TD SYNNEX, Life After Merger is All in the Family 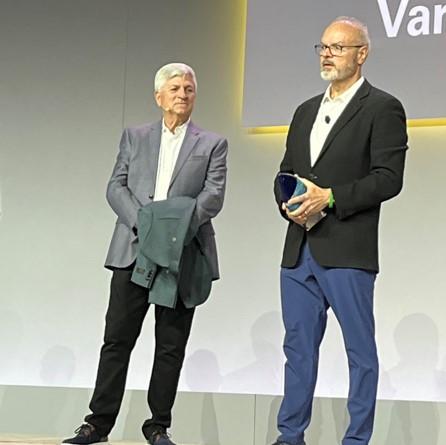 Seven months after becoming one company, Tech Data and SYNNEX are combining org charts, standardizing on a single ERP system, and moving past the awkwardness of being colleagues instead of rivals, according to execs Bob Stegner and Peter Larocque (pictured). By Rich Freeman
Tweet

Seven months after Tech Data and SYNNEX officially merged to form TD SYNNEX, employees of the once fierce competitors have moved past the awkwardness of suddenly being colleagues instead. But it didn’t happen overnight.

“In the beginning, it’s just like anything,” said Bob Stegner, the distribution giant’s senior vice president of marketing for North America, in a conversation with ChannelPro at the spring 2022 meeting of the company’s Varnex partner community. “When you’re bringing two families together, it’s getting to know each other, and once you get to know each other then it becomes more natural.”

Peter Larocque, TD SYNNEX’s North America president, echoed that sentiment during a speaking appearance at the show, which wrapped up yesterday.

“The teams have been working well together,” he said.

That’s good, because by its own admission the company still has a lot of work to do. That includes merging two still separate SMB sales groups with different organizational structures and compensation plans, among other things, into one.

“We’re just still doing our job the best we can do it and not taking our eye off the ball, because we have goals to hit,” says John Phillips, vice president of SMB and MSP sales for the legacy SYNNEX portion of TD SYNNEX’s business.

Phillips expects the unified SMB sales team to be fully in place roughly six months from now. “I would say probably October 1st, if I had to guess,” he predicts, noting that his team and the legacy Tech Data team are still using separate ERP systems.

So, in fact, are a lot of vendors and partners outside the company. Though TD SYNNEX announced plans to standardize on SYNNEX’s custom-built ERP platform, called CIS, earlier this year, plenty of people are still using Tech Data’s SAP implementation.

“It’s up to us to make sure that we train and that we have support and we have concierge white glove service, so no orders are lost and partners are comfortable,” says Sammy Kinlaw, senior vice president of sales communities for North America at TD SYNNEX. “That’s a lot of work and a heavy lift, but we’re starting the process.”

TD SYNNEX’s Canadian unit is actually well along the way already. “We’ve already moved a number of customers over and a decent amount of business over, and it’s been seamless so far,” says Vice President of Marketing Mark Hardy. Newcomers to CIS have been offering “lots of opinions, lots of feedback,” he continues, adding that the input is welcome.

So far, that behind-the-scenes labor, like the TD SYNNEX merger itself, hasn’t affected Varnex partners much.

“The cool thing is it doesn’t look like they’re laying off or restructuring and moving people around,” says Paul Benson, CEO of Virtual Communication Specialists, a solution provider in Athens, Texas.

Benson, who is also currently president of Varnex, is looking forward to the increased buying power TD SYNNEX partners will soon enjoy, along with other potential payoffs of the merger. “We’ll have better access to the manufacturers,” he says. “Maybe we’ll have better availability.”

ChannelPro 5 Minute Roundup for the Week of January 23rd, 2023
END_OF_DOCUMENT_TOKEN_TO_BE_REPLACED