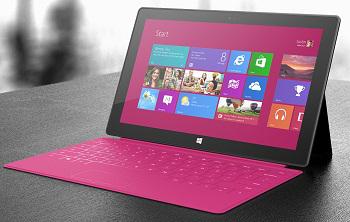 Microsoft’s Surface tablet will be one more platform option for customers, and should open up new integration opportunities for builders. By Martin Sinderman
Tweet

While Microsoft's plunge into the tablet market will likely not be a game-changer for system builders and integrators, it will provide them with a mobile solution that may fit in better with customers' existing systems.

Described as “a new family of PCs for Windows,” Surface is not only Microsoft's first true hardware device, but also the latest entry into a tablet market dominated by Apple and its iPad.

Released on October 26 and slated for sale in Microsoft Stores both online and in brick-and-mortar locations in the United States, Surface comes in two models. The first runs an Intel Core processor and features Windows 8 Pro, Microsoft's full-fledged new operating system designed for touchscreen interfaces. The other runs an ARM processor and includes Windows RT, a version of Windows 8 that will run only software available through the Windows Store, Microsoft's apps market for Windows 8.

Given that tablets, like other mobile devices, are all-enclosed systems, the role of system building gives way to systems integration, according to Jim McGregor, founder and principal analyst for Tirias Research, a Mesa, Ariz.-based technology research and advisory services firm.

“The system builder becomes the system integrator with these devices, which is basically a matter of going online, loading the necessary software, and making sure they work with the network,” says McGregor. “Dealing with tablets is not any different from dealing with laptops and smartphones - they are just one more platform option for your customers.”

Microsoft's entry into the tablet arena increases the number of options available, McGregor notes. And the product itself breaks some new ground.

One thing Microsoft has done extremely well in the design of Surface, notes McGregor, is bridge the gap between the tablet and the notebook with its keyboard alternatives. “We are basically down to having multiple computing platforms that have a screen and some kind of keyboard. And everything is pretty much going to be touchscreen soon,” he says.

For integrators, though, the biggest thing about Surface is not the device itself, but the accompanying introduction of the Windows 8 and Windows RT operating systems, according to McGregor. “Now the system integrator has the ability to choose from multiple platforms that interact seamlessly, from smartphones all the way through notebooks and PCs,” he says.

A tablet that runs Windows could be very attractive to IT professionals of all stripes, both in the familiarity that has come with years of use, as well as the expected ease of integration with other network components of the ubiquitous “Windows ecosystem of software and hardware partners,” as Microsoft refers to it.

Indeed, Windows 8 will revolutionize the PC world, says Gavin Livingstone, president of Bryley Systems Inc., a Hudson, Mass.-based managed service provider. “It is a product with a lot of potential,” he says, “and its huge installed base will guarantee at least modest success.”

The lack of an integrated modem is one shortcoming of Surface, according to McGregor, because of the importance of cellular connectivity in mobile devices. “So far, tablets haven't really been effectively utilized by cellular networks because data plans have been too cost prohibitive,” says McGregor. “But that is getting better as we get more shared data plans, with AT&T and Verizon already moving in that direction.”

The ability of tablets to use cellular networks is important in a workplace where employees are mobile, doing their jobs from remote locations, their homes, and on the road. “And while WiFi is good, having that cellular backup is critical, especially in the business environment,” notes McGregor.

LATE TO THE GAME?

“We think Microsoft's entry into the tablet market is a good thing, but I have to think that they are really late coming into the game,” says Andy Numa, CEO of Automated Systems Consulting Inc., a systems integrator in Wesley Chapel, Fla. “And I really don't know if they are going to be able to wrestle customers away from tablets from Apple and Google and others more established in the market.”

Livingstone concurs. While Surface could well be a superior product, he says, “they [Microsoft] are going up against a significant installed base of primarily iPads, and are coming in kind of late to the market.” Livingstone also notes that when the Redmond giant has forged into hardware, the company has not been as successful as it has in software.

At the end of the day, Surface offers another option for system builders and integrators, McGregor notes, “but it is one of many, and not necessarily one that stands out from the others.”

Keeping Tabs on Employees at Home | Are Certs Worth it? | Easy O365 Migration | and more
END_OF_DOCUMENT_TOKEN_TO_BE_REPLACED