SYNNEX Paints Bright Picture of Past, Present, and Future for Varnex Members 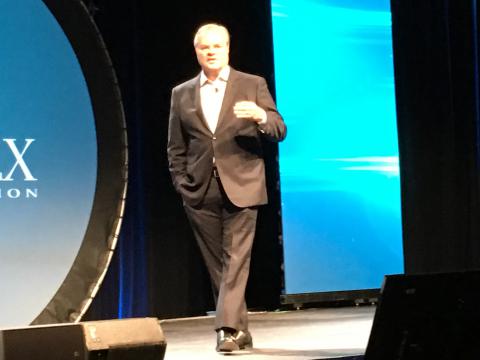 “You’re growing and so are we,” said Bob Stegner, senior vice president of North American marketing for SYNNEX, during a morning keynote.

“Our bets are paying off,” Larocque said.

That’s particularly true for Varnex members, Stegner noted. U.S. participants in that community grew revenue on SYNNEX solutions by 14.6 percent in the last year, an accomplishment that actually left them trailing their Canadian counterparts, who boosted SYNNEX-specific sales by 15 percent.

Those figures stand in stark contrast to an overall IT market in which global spending will actually decline by 0.3 percent this year and rise just 2.9 percent next year, according to recent data from Gartner.

Larocque gave the investments SYNNEX made internally over the last year in sales, support, and operational resources partial credit for results like those.

“We’ve been very focused on investing in the business to help you,” he said, noting that the company has augmented North American headcount by 9 percent over the previous 12 months and doubled personnel assigned to its mobility and Internet of Things group. That extra staffing enabled SYNNEX to perform some 5,000 mobile solution site surveys for resellers this year and 225,000 presales assessments, up 20 percent from 2015. Larocque expects those numbers to climb further in 2017.

“We’re going to continue to invest to be able to do more assessments for you where there’s money,” he said.

Adding headcount was a top focus area for SYNNEX in 2016. Others included opportunities in services, mobility, cloud computing, and vertical industries, all of which will remain priorities next year. The headcount “big bet,” however, will be replaced by a new emphasis on SMB solutions. According to Stegner, that initiative will draw from and feed into the other four.

“They’re intertwined,” he said of SYNNEX’s five priorities for 2017 during an interview with ChannelPro.

SYNNEX, which currently has 345 Varnex members in the U.S. and 93 in Canada, is recruiting more, Stegner said.

“But not a lot,” he added. “You don’t want it to get too big.” Access to top SYNNEX executives is one of the chief benefits of belonging to Varnex, along with peer-to-peer networking and best practices sharing. Both could be diluted if the community gets too large.

ICYMI: Our Channel News Roundup for the Week of April 5th
END_OF_DOCUMENT_TOKEN_TO_BE_REPLACED

Jabra PanaCast Review - Get Your Huddle On
END_OF_DOCUMENT_TOKEN_TO_BE_REPLACED