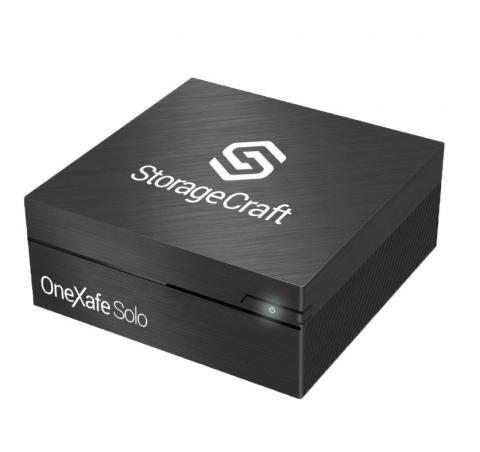 Called OneXafe Solo 300 and due to reach market in October, the system is the vendor’s first appliance-based BDR offering and a significant step in its effort to build an end-to-end data protection portfolio for businesses and partners of all kinds. By Rich Freeman
Tweet

The new OneXafe Solo 300, which is due to enter general availability at the end of October, uses the company’s ShadowXafe BDR software to replicate data on servers, PCs, and virtual machines to StorageCraft’s cloud, where it can virtualize recovery environments within milliseconds of a system failure.

The solution extends StorageCraft’s OneXafe converged storage and data protection platform, which originally targeted midsize businesses, into smaller environments with simpler requirements for the first time, and completes a BDR portfolio that StorageCraft has been steadily expanding in recent years.

“It rounds out a very robust solution set that we bring to the table,” says Jeannine Edwards, senior director of channel marketing at StorageCraft.

Designed to be easy for MSPs to deploy and use, the OneXafe Solo 300 requires little ongoing maintenance, according to Shridar Subramanian, StorageCraft’s vice president of product management and marketing. “It is plug and play,” he says. “They can just pretty much deploy it and just set and forget it and all of the data gets protected.”

The solution includes built-in integration with the ConnectWise Manage PSA application as well as Datto’s Autotask PSA. Technicians can administer the product through OneSystem, the consolidated management interface that StorageCraft introduced along with ShadowXafe and OneXafe last August.

The lightweight OneXafe appliance at the heart of the new offering measures roughly 4.5” x 4.5” x 2”. Optimized for use with StorageCraft’s Cloud Services platform, the system ships without onboard storage. Users who want local recovery capabilities, however, can add up to 2 TB of internal capacity by inserting a separately purchased HDD or SSD into the system’s 2.5” drive bay. A USB port supports connections with external drives as well.

According to StorageCraft, the OneXafe Solo 300 protects up to 20 servers, or more in environments with especially high-speed cloud connections. That compares favorably with similar solutions from competing vendors that accommodate as few as four servers per appliance, Subramanian contends, sparing users the expense and hassle of supporting multiple devices in larger SMB settings.

Pricing for the OneXafe Solo 300 is based entirely on monthly fees that begin at $100 per endpoint per month. There are no upfront charges for the system’s hardware. “It’s priced for how partners do their managed service offering,” Edwards observes, predicting that the low price point will make the product an appealing option for smaller customers with tight budgets.

“This is a right fit price point for them,” she says.

StorageCraft has yet to decide how it will price appliance upgrades when next-generation OneXafe hardware becomes available. “I would not anticipate a big change in the fee. There might be a marginal one or it may be the same,” Subramanian says.

The OneXafe Solo 300 is currently in beta testing. StorageCraft encourages interested MSPs and end users to sign up as participants in that process.

The addition of an appliance-based solution for smaller environments to its product family is a significant milestone for StorageCraft, which has been progressively widening its portfolio since accepting a $187 million private equity investment some three and half years ago. According to Edwards, the company now offers a range of on-premises, direct-to-cloud, and cloud-to-cloud data protection solutions broad enough to accommodate everything from mom-and-pop businesses to enterprises, as well as both MSPs and product-oriented resellers.

LG Gram for Business 17 (2020): Big Reasons to Like It
END_OF_DOCUMENT_TOKEN_TO_BE_REPLACED