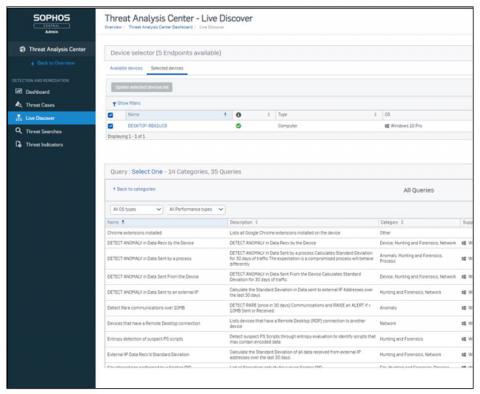 Available now at no extra cost in select editions of Sophos’s Intercept X system for endpoints and servers, the upgraded product includes tools for detecting indicators of compromise and mitigating them through a command line management interface. By Rich Freeman
Tweet

Sophos has shipped a major upgrade of its endpoint detection and response (EDR) platform that adds threat hunting and remediation capabilities to enhanced versions of the product’s machine learning-based threat identification and malware analysis functionality.

“This is the most significant upgrade of any product we’ve ever had. It’s really that significant,” says Dan Schiappa, chief product officer at Sophos.

Users can employ the system’s new “Live Discover” threat hunting feature to query 90 days’ worth of data from thousands of endpoints and servers about issues like whether or not processes are trying to make a network connection on non-standard ports or which devices have unauthorized browser extensions.

The tool employs the familiar SQL language and automatically suggests how to complete a query as you compose it. “We show you as you’re writing it what the next command could be, very similar to what you might see in Excel when you’re doing an Excel formula,” Schiappa says, noting that the system comes with a library of pre-written queries as well.

Users can send a suspicious file identified during threat hunts to SophosLabs for deeper on-demand inspection. “We’ll do a machine learning scan on it, break it down for you, and give you some idea to help you decide whether it may be malicious or not,” Schiappa says. Companies can also pair the EDR solution with the Managed Threat Response service that Sophos introduced last October for assistance from live security experts.

“You can actually jump on an endpoint or server and actually resolve the situation right from the console,” Schiappa notes.

The EDR solution’s mix of automated and hands-on capabilities is designed make it suitable for a wide range of users, he continues. “We’ve taken a tool that can be very powerful in the hands of a very sophisticated analyst and also made it very powerful for somebody who’s not sophisticated.”

Sophos’s latest solution arrives at a time of continuously escalating and increasingly dangerous threat activity. Sophos researchers describe one example of that phenomenon in a report published today about the Kingminer botnet, which utilizes brute force techniques to acquire server credentials and then spreads malware with help from a toolkit that includes the EternalBlue exploit, which gained worldwide notoriety three years ago in connection with the WannaCry ransomware attack.

3 Facts About Ransomware in Honor of Anti-Ransomware Day
May 15th, 2020

2021 ChannelPro SMB Forum Series Kicks Off in the Midwest
Your Next Move: Server Administrator
END_OF_DOCUMENT_TOKEN_TO_BE_REPLACED

Jabra PanaCast Review - Get Your Huddle On
END_OF_DOCUMENT_TOKEN_TO_BE_REPLACED