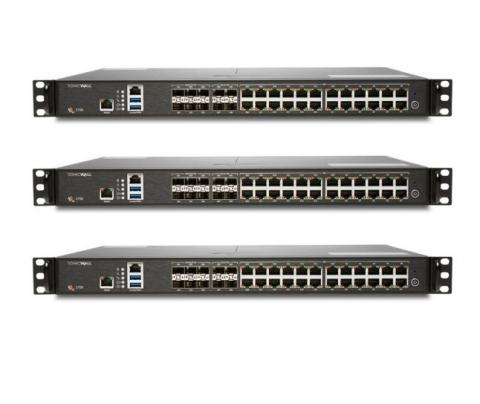 A new firewall and updated sandbox appliance, along with enhanced analytics and management tools, are designed to deliver faster performance and enable easier administration. By Rich Freeman
Tweet

Chief among those offerings is an addition to the security vendor’s NSa firewall series that provides faster throughput and more capacity than its predecessor at the same price. The NSa 3700 (pictured) supports 22,500 connections per second, up to 750,000 concurrent DPI connections, and up to 3,000 site-to-site VPN tunnels, SonicWall says, and delivers an average 2.6x performance improvement, yet costs the same as the NSa 3650 model it replaces.

“Where you see the NSa 3700, in my opinion, to be the sweet spot is for organizations that care about security but want to have it at a reasonable price,” says Kayvon Sadeghi, executive director of product marketing at SonicWall. He expects the new unit to prove popular in the retail, K-12 education, higher education, and midsize enterprise markets.

Equipped with an updated interface and onboard support for the TLS 1.3 encryption protocol, the NSa 3700 is slated to reach market “shortly,” according to Sadeghi.

Unlike earlier versions of the system, the new one can run on air-gapped networks with no external connections. According to Sadeghi, government buyers in particular will find that feature attractive. “It’s an important requirement especially for all your three-letter agencies,” he says.

Version 3.0 of SonicWall’s Next-Generation Analytics solution, which is available now, runs on a modernized cloud architecture that enables 25% better performance than the previous release and more flexible scalability.

“If you need more bandwidth, it automatically adjusts up or downgrades,” Sadeghi says. Next-Generation Analytics draws on more than 1.1 million sensors worldwide to provide actionable information on the latest threats.

A new edition of SonicWall’s WiFi Cloud Manager product bearing a new name is scheduled to become generally available in May. Now called Wireless Network Manager, the system enables oversight of switches in addition to access points through a shared interface. Technicians had to use firewall management software to administer switches in the past.

“The idea here is to reduce operational costs and reduce the possibility for misconfiguration, because you don’t have to switch back and forth between the different solutions,” Sadeghi says.

SonicWall’s latest salvo of products arrives days after publication of the company’s 2021 Cyber Threat Report, which was packed with alarming statistics. Those include a 62% increase in ransomware globally last year and a 158% spike in North America. Malicious Office files were up 67% year over year while Internet of Things malware attempts climbed 66% to 59.6 million. In addition, RTDMI detected 268,362 never-before-seen malware variants, a 74% jump.