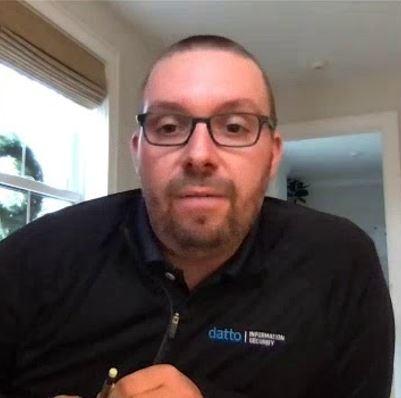 While that war is winnable, emphasizes Datto CISO Ryan Weeks (pictured), a task force contributor, it will take years of coordinated global effort plus either self-imposed or government-mandated MSP regulations. By Rich Freeman
Tweet

Ransomware can be defeated, but it won’t be quick, easy, or cheap.

That’s made clear by “Combating Ransomware: A Comprehensive Framework for Action,” which was published today by the non-profit Institute for Security and Technology’s Ransomware Task Force (RTF). Formed early this year, the group assembled a collection of experts from the public and private sectors to prepare a blueprint for combatting a global scourge doing billions of dollars’ worth of damage at out-of-control rates. Indeed, ransomware incidents were up 485% in 2020 versus the prior year, according to recent research from security vendor Bitdefender.

“It’s an acknowledgement that the problem is getting so pervasive and the impacts are getting so monumental that it’s starting to have real impacts on national security, public health, and safety, and that we can’t really treat this as a private industry problem anymore,” says Ryan Weeks, chief information security officer at Datto and a contributing member of the task force. “We really need to start treating it like the global, massive problem that it is.”

To get a sense for just how massive he means, consider the report’s five highest-priority recommendations:

“We really looked at the entire ransomware ecosystem from 360 degrees and said, ‘what are some recommendations that we can make to the governments and to private institutions that could really start to really make a dent in this ecosystem,’” Weeks says. All of them, he acknowledges, will take years of effort to accomplish.

Several, moreover, apply directly to MSPs, 95% of whom say they’re increasingly being targeted by ransomware and 78% of whom have experienced attacks against SMB clients in the last two years, according to Datto’s latest Global State of the Channel Ransomware Report. Those include the creation of a threat intelligence clearinghouse along the lines of the information sharing and analysis organization launched by CompTIA last summer. Other proposed measures, however, would be less voluntary.

“That was kind of inevitable given some of the high-profile state and local government hacks that have occurred leveraging MSPs and MSP technology stacks,” Weeks notes.

To ensure every MSP complies with minimum ransomware mitigation standards, the RTF endorses mandatory adoption of a “cyber-hygiene program” such as CIS Controls Implementation Group 165 or the NIST Cybersecurity Framework, as well mandatory disclosure by MSPs of ransomware incidents involving customers. The government funds recommended by the report, its authors note, could be used to underwrite the cost of complying with those rules.