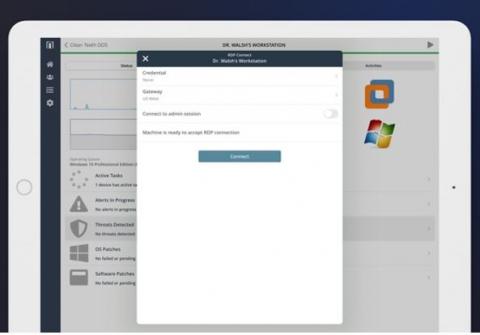 Version 5.1 of Ninja’s flagship product, which is available now, is the first to provide access via Apple tablets, in addition to PCs and iPhones. Technicians out on the road doing site visits will appreciate the ability to handle support tasks on a device less cumbersome than a laptop but bigger than a smartphone, according to AJ Singh, NinjaRMM’s vice president of product management.

“This provides you that middle ground,” he says. “If your iPad is Internet-enabled, you can get full-screen real estate and do stuff much more easily and conveniently.” An app for Android tablets is in development now, Singh adds.

The new integration functionality for Autotask lets MSPs map custom RMM device roles to corresponding groups in their PSA, to improve synchronization of data. Users can export more information about devices, such as their NinjaRMM URL or remote control quick access link, now as well. Both features were available to users of the ConnectWise Manage PSA system before.

“The goal here was to do something similar on the Autotask front and bring that functionality at par with what the industry demands,” Singh says.

Expanded support for Splashtop now lets MSPs give end users the ability to permit or deny remote control sessions on an organization by organization basis or for specific device categories. “You could have a different setting for Windows servers versus Windows desktops or Mac machines,” Singh explains.

Channel pros who prefer TeamViewer already have company-level control over permit and deny rights, but can’t yet configure that setting by device. Both Splashtop and TeamViewer users can also automatically approve or reject connections if users don’t respond within a specified timeframe now.

TeamViewer and Splashtop are the two remote control solutions supported by Ninja at present. Support for Microsoft’s Remote Desktop Protocol that will include secure gateway connections, credential exchange integration for administrative privileges, and dynamic graphics settings based on connection performance is currently in open beta testing.

Also included in the latest release is the ability to give end users access to an endpoint’s command line. According to Singh, the new feature will be especially useful for MSPs who provide co-managed IT services in league with a customer’s technicians or who support power users. “If a developer wants to connect to his Linux machine remotely, they can do that,” he says.

Command line access is the newest addition to the end user sharing functionality Ninja rolled out last year in the response to the coronavirus pandemic as a means of letting work-from-home users connect with devices at the office securely. New self-serve capabilities, including the ability to manage backups and restore files, are slated to arrive in the future.

“Quality of life” upgrades in version 5.1 include the ability to search for devices based on their current health status, filter scripts based on whether or not they’re native to Ninja’s platform, and run reports across organizations instead of for one customer only.

“That will let you more holistically see the devices that you’re managing,” Singh says.

Ninja introduced a BDR solution, its second product, last August. At present, the company disclosed today, that system helps more than 500 partners protect over 1.5 PB of data on 7,500 workstations and 1,200 servers. NinjaRMM currently has more than 5,000 partners and nearly 2.5 million endpoints under management.