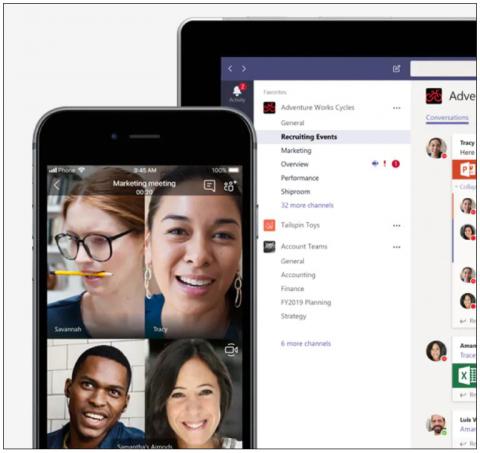 Microsoft has rolled a host of new capabilities into Teams, the chat-based collaboration component of its Office 365 productivity suite, and launched a free trial program for the system.

Announced days ahead of Microsoft’s 2019 Inspire partner conference, which starts Sunday in Las Vegas, the new features arrive amid swift adoption of the program, which first reached market two years ago. At present, Microsoft reports, Teams has over 13 million active daily users.

Especially in relation to Slack, the solution that pioneered command-line collaboration and beat Teams to market by three years, he continues. According to the Slack website, that system currently has over 10 million daily active users.

New features now available in Teams include messaging options tailored to the needs of industries like healthcare in which getting information to workers quickly and reliably is critical. Those include “priority notifications,” which allow users to automatically resend alerts to people every two minutes until the recipient responds.

“It’s very different from just a normal message,” Spataro observes. “It actually will keep reaching out to make sure that you see the alert.”

New “read receipts” functionality, meanwhile, notifies users immediately when an important message has been viewed. “Seems like a little thing, but in these types of scenarios where time is of the essence it really matters,” Spataro says.

Also included in today’s update wave is a new message type called announcements that lets senders call extra attention to especially significant information, as well as the ability to cross-post messages in multiple channels at once. Organizations can now assign moderators with special administrative rights to channels as well.

“They could lock that channel to be read-only [or] they could delete posts that they didn’t think were in keeping with the channel,” says Kady Dundas, head of Teams marketing.

Other additions to Teams target restaurant servers, cashiers, field technicians, and other “firstline workers” who typically don’t have a desk or PC. According to Microsoft, there are some 2 billion such employees globally.

“These people have largely not had the benefit of technology,” Spataro says.

Included among the latest enhancements for firstline workers is the ability to trade shifts with colleagues. A forthcoming time clock feature will allow users to punch in or out directly from inside the Teams interface. Built-in integration with user location data will let companies ensure that employees checking in for work really are onsite.

“Your manager can actually geo-fence the time clock so that it only works when you’re physically on premises,” says Dundas.

Administrative upgrades unveiled today include the addition of Teams to the app update bundle associated with Microsoft’s Office 365 ProPlus plan. “That’s a big deal, because many customers want to roll out all the apps at the same time,” Spataro says. “This will allow them to roll out Outlook, Word, Excel, [and] PowerPoint all at the same time and now Teams together with it.”