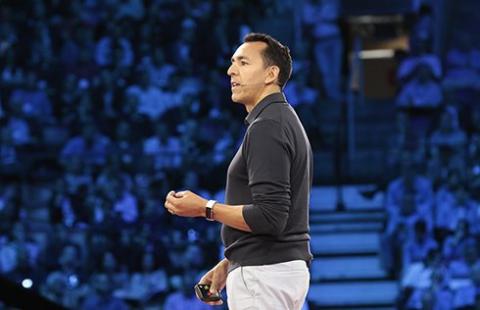 Announced on day two of Microsoft’s Worldwide Partner Conference, along with a host of additional product news, the new offerings will enable resellers to sell both Windows 10 Enterprise E3 and Surface hardware on an as-a-service basis for the first time. By Rich Freeman
Tweet

Guess what, MSPs. You’re not the only ones sold on the merits of recurring revenue. Inspired in part by the success of its Office 365 communication and collaboration suite, Microsoft is betting big on subscription-based pricing too.

That became starkly apparent Tuesday at the 2016 Microsoft Worldwide Partner Conference in Toronto, where company executives announced a series of moves aimed at empowering solution providers to offer everything from cloud-based productivity and platform technology to operating systems and hardware at per-user, per-month prices on one consolidated bill.

The big new additions to Microsoft’s subscription-based product lineup are the recently re-branded Windows 10 Enterprise E3 and the Microsoft Surface device family. Starting this fall, members of Microsoft’s Cloud Solution Provider (CSP) program will be able to sell the first of those offerings for $7 a seat per month.

“For the price of a cup of coffee and doughnuts,” said Yusuf Mehdi, corporate vice president of Microsoft’s Windows and Devices Group, in a morning keynote, partners will be able to equip their customers with Windows 10 Enterprise E3’s enhanced security capabilities, which include rigorous access controls and built-in multifactor authentication technologies.

In the past, SMBs in need of those extra safeguards had to acquire the Enterprise edition of Windows 10 via Microsoft’s Open License program, which required them to purchase a minimum of five seats, sign a multi-year contract, make upfront payments, and keep close track of license consumption.

“If you’re 15, 25, 50 people, that’s not really a fantastic solution,” said Nic Fillingham, a senior marketing manager and strategist in Microsoft’s Windows SMB group during an interview with ChannelPro. The new subscription offering, by contrast, lets businesses buy as few or many seats as they wish on a pay-as-you-go basis through the same CSP reseller who sells them their Office 365 and other Microsoft subscriptions, and via the same bill.

“That’s a level of scale and flexibility that we’ve never had before,” Fillingham says. “Partners have asked for it, customers have asked for it, and it’s really just going to open up the small business segment for our partners to be able to sell in that kind of complete Windows security story for the first time.”

Microsoft expects there to be a lot of security-conscious customers to sell that story to, moreover. The company sees roughly one out of every three SMBs as a potential buyer for the CSP edition of Windows 10 Enterprise E3. That’s about 18 to 19 million of the 56 million SMBs Microsoft says are in the U.S., drawn mostly from industries like healthcare, retail, and financial services that deal with sensitive data and face stringent regulatory compliance requirements.

“This is not going to be for 100 percent of SMBs, but it’s for a solid third of them,” Fillingham says.

That, however, is the good news. The possibly less welcome news for CSP resellers is that Microsoft doesn’t plan to share any of its $7 a month subscription fee with them.

“There will be margin available for partners at that price,” says Matt Barlow, general manager for new devices and experience product marketing at Microsoft, but mostly in connection with service bundles they can create that combine Windows with other Microsoft products, plus management and support services, for one package rate.

Partners will be able to include Microsoft hardware in bundles like that for the first time this fall too thanks to the “Surface as a Service” solution Microsoft also introduced Tuesday. The new program allows CSP partners to sell Microsoft Surface devices for a monthly fee under a lease-like arrangement that enables end users to refresh hardware more frequently and keep up with the latest capabilities in Windows and Office. When combined with the rest of Microsoft’s subscription-based product portfolio, the end result is a top-to-bottom stack of small business software, plus the hardware to run it on.

“Now you have one holistic end-to-end offering for your customers” encompassing platforms, hardware, and software, and all at a single bundled rate, Mehdi said during his keynote.

Only CSP partners who are also Surface Authorized Distributors can participate in the new program, however. Microsoft was unable to clarify immediately whether other partners will be able to acquire and resell Surface as a Service hardware from those authorized distributors much the way 2-Tier CSP resellers purchase and resell Office 365 licenses from 2-Tier distributors today.

Also announced at WPC Tuesday during a morning session packed with product news were: