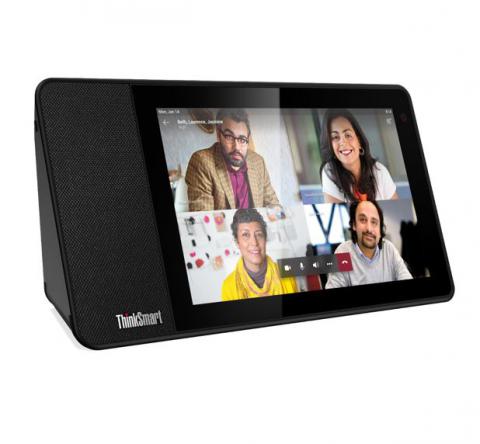 In addition to updated ThinkPad X1 Carbon and X1 Yoga laptops, plus a host of monitors and accessories, the salvo of offerings unveiled today includes the ThinkSmart View (pictured), a purpose-built device for Microsoft Teams audio and video meetings. By Rich Freeman
Tweet

“[It] just gives you a lot of functionality and flexibility, especially for mobile users who are constantly on the go, on an airplane, [or] spending time in a non-office environment,” Cato says. 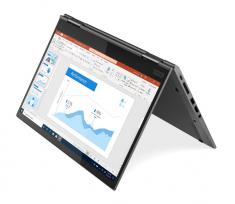 The new ThinkPad Yoga X1 Gen 5 (pictured left) boasts most of the same features as its clamshell cousin, including the unified communication function keys, Dolby Atmos speakers, and Dolby Vision display, as well as PrivacyGuard and PrivacyAlert security protection.
Equipped with a CNC aluminum chassis for added durability, the 14-inch system weighs 2.99 lbs. and up, and provides up to 18.3 hours of power. Lenovo plans to release it later this year for list prices starting at $1,599.

Both new laptops are compatible with the ThinkPad TrackPoint Keyboard II, an external keyboard designed to mimic the look and feel of Lenovo’s highly regarded notebook keyboards. Due to ship in May for $99.99 and up, the device comes with 2.4Ghz wireless and Bluetooth 5 connectivity that can support up to two Windows or Android devices. The battery is designed to provide up to two months of use on a charge.

Significantly, the new keyboard includes Lenovo’s iconic TrackPoint pointing device. “I love the red dot,” Cato says. “I absolutely enjoy that experience, and I think having that in a keyboard that you can use with different form factors is a key product for us.” 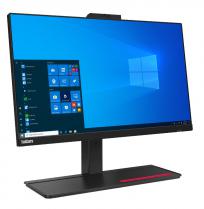 Lenovo’s ThinkCentre line of desktop PCs, meanwhile, has gained a new all-in-one model (pictured right). Called the M90a and due in June, it features a wide-view 23.8-inch FHD display with 1920 x 1080 resolution plus an HD camera with a Lenovo ThinkShutter for privacy. It supports up to 32GB of DDR4 memory, as well as up to a 2TB hard disk drive, up to a 1 TB SSD, and up to 16 GB of M.2 Intel Optane memory. Users can control the system using voice commands via Amazon’s Alexa virtual assistant. It will list for $1,099 and up.

“For a small, medium business customer, [it] could be an ideal product for them to be able to use in a small office/home office type of environment doing collaboration calls or engagement with clients or with other colleagues around the world,” Cato says.

Lenovo plans to ship the device in April. Pricing will begin at $2,499.

Lenovo’s move into the smart office market began in 2017 with the launch of the ThinkSmart Hub 500 conference system. According to Cato, ThinkSmart products account for a modest but mounting share of Lenovo’s commercial revenue at present.

“It’s still what I would call an incubation business that we’re still building, but it is growing fast and we’re finding new areas of opportunity,” he says.