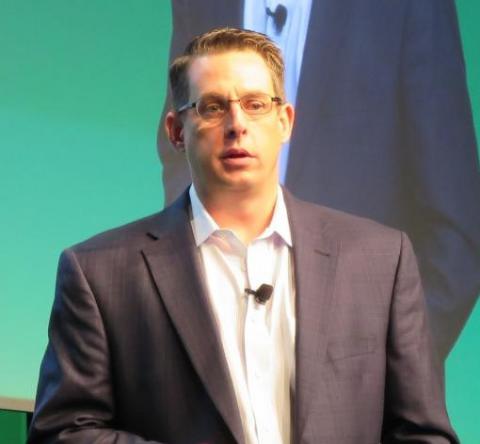 Chris Frey, who will step aside as head of the company’s North American commercial business at the end of the month, will be replaced by two executives, including one focused exclusively on sales of server, storage, and networking gear. By Rich Freeman
Tweet

In what it calls a major commitment to its server business, Lenovo has rolled out new data center products and incentives for its partners, as well as changes atop its North American sales organization.

“He’s been a proponent or a big reason for a lot of our success,” says Kinlaw of Frey. “He’s leaving as a friend and we wish him well.”

Lenovo declined to specify how recently Frey informed the company of his plans to leave, but indicated that it was a recent decision.

Going forward, two executives rather than one will hold responsibility for commercial sales, with Cliff Gumkowski, vice president of the company’s North America Data Center Group (DCG), heading up sales of server, storage, and networking gear and Emilio Ghilardi, president of Lenovo North America, leading the commercial PC business on an acting basis. Ghilardi will appoint a permanent executive to that latter role at an unspecified point in the future.

Kinlaw emphasizes that neither those organizational changes nor Frey’s exit have any implications for Lenovo’s North American partner group, which is independent of the commercial sales organization and will continue to encompass both the PC and data center channels, adding that Lenovo’s dedication to selling through partners remains undiminished as well.

“We’re not wavering from our channel-first strategy,” Kinlaw says. “As a matter of fact, we’re looking at ways we can double down.”

To that end, the company is introducing a new line of hyperconverged infrastructure solutions for SMBs that combine Lenovo appliance hardware with software from Nutanix Inc., of San Jose, Calif., at what Kinlaw characterized as a “heavy discount.” The product bundles range from single-processor SKUs to 4-processor, dual node configurations at price points running from $25,000 up.

According to Gumkowski, the new offerings—which are available for ordering now and begin shipping later this month—respond directly to requests from partners for entry-level hyperconverged systems.

“This is really something that the channel has asked for,” he says.

Lenovo unveiled an agreement to sell hyperconverged appliances pre-loaded with Nutanix software last November, and introduced the SMB-oriented Converged HX 2000 solution in May. According to Kinlaw, hyperconverged solutions in general have been a top driver of sales to net new customers since the start of the current fiscal year in April.

“That’s been one of the number one door openers for Lenovo over the past six months,” he says.

To further underscore its focus on data center sales, Lenovo has also rolled out new financial resources and incentives. Those include a “competitive win bucket” of funds that partners can draw on to secure contested opportunities and a new “no exclusionary” policy on spiffs designed to give midsize and larger partners access to sales bonuses chiefly available to smaller resellers at present.

Diversity Focus Webinar: WANTED: (More than) a Few Good Women in IT
Why I Give Away Valuable Information
END_OF_DOCUMENT_TOKEN_TO_BE_REPLACED

Jabra PanaCast Review - Get Your Huddle On
END_OF_DOCUMENT_TOKEN_TO_BE_REPLACED