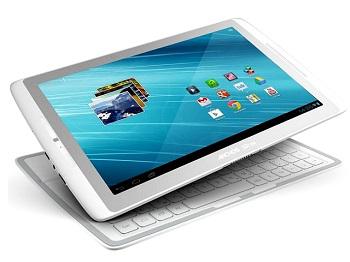 With white-label tablets almost 10 percent of the U.S. tablet market, builders can profit by making them software delivery vehicles for their vertical market clients By Hank Hogan
Tweet

When considering no-name, or white-label, tablets, system builders confront more than a blank slate. On one hand, there are established heavyweight players like Apple, Samsung, and possibly Microsoft raising the specter of low margins. On the other hand, there is a demand for white-label tablets-and a supply.

"There is an actual supply chain that has built up around this white-box market," says Richard Shim, a senior analyst for the PC group at NPD DisplaySearch. "We see it from the panel side, where some panel makers are actually building specifically for this market. So that question of where my next batch of components will come from is less of a concern."

DisplaySearch puts white-label devices at 29 percent of the total tablet shipments worldwide, a market share Shim feels is sustainable indefinitely due to the supply chain. Most shipments are in emerging economies. In China, for instance, Shim says white-label tablets are at 47.5 percent; the corresponding figure in North America is 8.1 percent.

In explaining this difference, Shim lists several reasons. First, there are strong, established brand-name tablets, and these vendors often launch new products locally first, in the United States. Second, there is a high PC penetration rate. In the developed world a tablet typically complements existing IT infrastructure. In an emerging market, a tablet might be the first choice for computing.

That difference is illustrated by U.S. usage scenarios. A construction firm and its partners, for instance, may use a tablet as a way to carry blueprints and update punch lists electronically and on the fly. However, the actual CAD work is done on desktops and laptops connected to a server.

But, a white-label tablet opportunity approaching a tenth of the total market can be compelling. A possible avenue of exploitation would be to load up such a tablet with specialized software, making it a software and services delivery vehicle.

Bullish on White Labeling
As might be expected, white-label tablet supplier uPlay Tablet, in Sunnyvale, Calif., is bullish on the prospects for its gear. The company's Shenzhen, China, production facility can churn out 70,000 units a month, in form factors that range from 7 to 10.1 inches. The tablets run versions of the Android operating system.

Leo Pang, uPlay's founder, says the cost of a tablet can possibly be less than $50. For that, users get a touchscreen for input, an ARM-based CPU, flash storage for data, and a USB port to connect to sensors and the outside world. The resulting device is smaller and cheaper than a PC, yet offers enough functionality to be a substitute. "Most of the PC-based systems can be and will be replaced by tablet-based systems," Pang predicts.

Pang breaks down the company's white-label tablet customers into three categories. Some users employ tablets for control and display functions, with the device acting as a human-machine interface. A second group is interested in tablets for consumer and vertical markets. Finally, the third category uses tablets as tools for marketing and promotion.

Some system builders are skeptical of the prospect of using no-name hardware and an OS with which they are not intimately familiar. David Stinner, president of Tonawanda, N.Y.-based system builder US itek Group, likes ARM-based tablets running Windows RT. He thinks the latest tablets from Microsoft will be winners in business settings and reports positive client feedback about them. As for white-label tablets, he foresees low margins, particularly if something comes between him and the equipment supplier. Given this situation, he says, "There is no room in the food chain for me."

SYNNEX to Emphasize Device as a Service, Mobile Activations, and Subscription Renewals in 2019
March 26th, 2019

Keeping Clients Out of the Headlines
June 24th, 2019