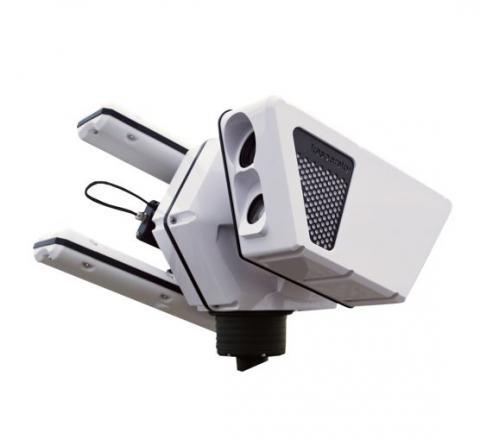 The new system combines third-party hardware with a neural network to identify trespassing drones automatically and prevent them from communicating with their controller. By Rich Freeman
Tweet

Kaspersky has introduced a solution designed to protect airports, power plants, and other sites from unauthorized trespassing by civilian drones.

The new system, named Kaspersky Antidrone, uses hardware modules from third-party manufacturers to identify drones using a combination of video cameras, radar, audio sensors, and LIDAR, a laser-based technology for detecting objects and measuring their distance. According to Kaspersky, no other drone security solution on the market utilizes a laser scanner.

When the detection module spots a moving object, it sends the coordinates to a dedicated server, which then passes them along to an additional device that tracks the target and sends video of it to a neural network trained to distinguish drones from other moving objects. If it identifies the target as a drone, the system automatically jams communication between the aircraft and its controller using “permitted radio interference signals.”

Most drones will either fly back to their point of origin automatically at that point or land themselves wherever they lost connectivity, Kaspersky says. Either way, there is no damage to the aircraft.

The neural network, Kaspersky says, can classify drones by type and model, and respond differently based on its findings.

Kaspersky Antidrone arrives amid rapid commercial and civilian drone adoption. Global spending on drones will climb at a 40.7% CAGR through 2025 to $144.38 billion, in fact, according to Adroit Market Research.

As access to drones widens, dangerous incidents, including an apparent attack on Gatwick Airport last year that disrupted hundreds of flights and over 100,000 passengers, are multiplying.

“Many members of Kaspersky Antidrone team, myself included, have long been drone pilots,” said Vladimir Turov, project owner of Kaspersky Antidrone, in a press statement. “Unmanned aircrafts can sometimes pose real danger. For instance, I’ve witnessed some risky situations during public events. It clearly causes some doubt around the use of the technology. Unfortunately, as a drone pilot, you often don’t know which locations are prohibited, so when your drone is unexpectedly crushed or physically attacked with hostile protection measures, it is very frustrating. That’s why, during the development of our product, we took the interests of drone enthusiasts as well as safety requirements and concerns into account. This helped us develop a way to ensure drones do not enter prohibited areas, without damaging them.”

Kaspersky, which rebranded itself under that name in June after many years of doing business as Kaspersky Lab, has introduced several other security solutions for emerging threats this year. In September, for example, it unveiled products designed to combat cheating in esports and safeguard blockchain-based applications.

The company introduced a new partner program in January as well.

3 Facts About Ransomware in Honor of Anti-Ransomware Day
May 15th, 2020

ChannelPro 5 Minute Roundup for the Week of January 11th, 2021
END_OF_DOCUMENT_TOKEN_TO_BE_REPLACED

Jabra PanaCast Review - Get Your Huddle On
END_OF_DOCUMENT_TOKEN_TO_BE_REPLACED