Ingram to Partners: Get on Board the Cloud Economy While the Time is Ripe 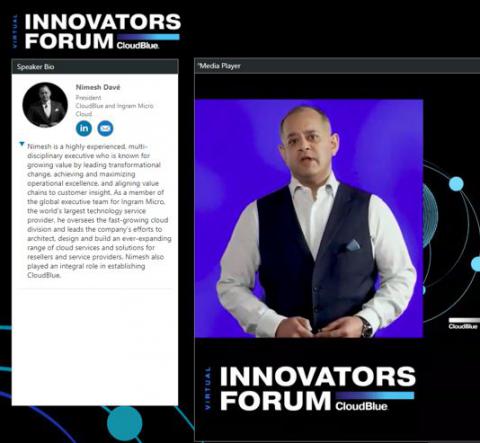 At its CloudBlue Innovators Forum event this week, Nimesh Dave (pictured) and other speakers urged channel pros to get in on a digital economy growing even faster this year not so much despite the global coronavirus pandemic as because of it. By Rich Freeman
Tweet

COVID-19 has brought many aspects of modern life to a temporary halt, but it’s radically accelerated the rise of the cloud economy.

“What we are seeing today is unprecedented and shows no signs of slowing down,” says Tarik Faouzi, vice president of Ingram Micro’s CloudBlue B2B ecommerce enablement platform.

Faouzi spoke yesterday at the start of Ingram’s CloudBlue Innovators Forum, an online conference taking place this week. With many physical storefronts shuttered and millions of employees working from home instead of an office, he noted, the already rapid growth of cloud-based marketplaces and solutions has only gained steam this year.

Numbers presented by Forrester analyst Jay McBain elsewhere at that show reinforced the point. “E-commerce has grown more in the last three months than the last ten years combined,” he said, citing research from McKinsey based on Forrester market data.

Furthermore, he added, sales of infrastructure services via Microsoft Azure, Amazon Web Services, and Google Cloud Platform have climbed 47, 44, and 41 percent respectively since the appearance of COVID-19 despite the pandemic’s massive impact on global GDP. CloudBlue itself is experiencing “high 80% growth year over year” at present, according to Faouzi in a conversation with ChannelPro last week.

“This is not going to come back down,” McBain says.

Faouzi urged businesses of every size and description to pay heed to that observation. “All of this is wakeup call,” he said, noting that what’s been a punishing recession for most businesses has been a boom time for companies already embracing the cloud before this year.

“Companies that have a digital strategy navigated our latest crisis way better than the ones that did not,” Faouzi said.

Spun off by Ingram from its global cloud business as an independently operated division in 2018, CloudBlue provides B2B services that enable cloud service providers to construct and manage channel ecosystems that sell subscription-based online application and infrastructure products at scale.

At present the platform supports over 200 vendors and 80,000 partners who serve an estimated 2 billion-plus end users worldwide. Though most of those vendors are giant enterprises—including Ingram itself, which uses CloudBlue technology to power its own cloud distribution marketplace—CloudBlue used this week’s show to highlight its growing penetration in mid-market businesses worth $500 million to $4 billion annually. Those include myDevices, a maker of plug-and-play Internet of Things solutions, and online payments vendor CloudBanking.

Far less substantial companies with equally big ambitions, however, can use CloudBlue to drive online growth as well, according to Nimesh Dave, president of CloudBlue and Ingram Micro Cloud.

MSPs, solution providers, and other channel pros that fail to define and pursue their own place in the digital economy, Faouzi warned last week, do so at their own imminent peril.

“The world is changing at a very fast pace and companies need to get on board,” he said.

Ingram to Partners: Get on Board the Cloud Economy While the Time is Ripe
October 13th, 2020

Jabra PanaCast Review - Get Your Huddle On
END_OF_DOCUMENT_TOKEN_TO_BE_REPLACED