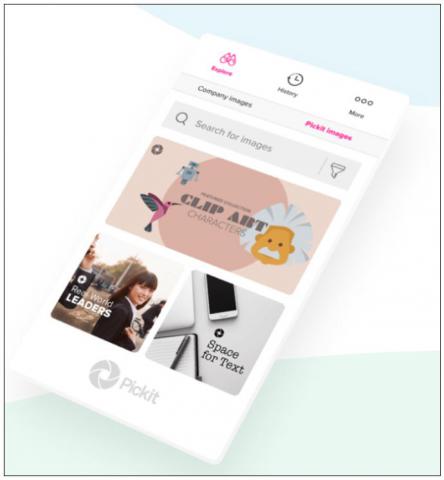 Under terms of the agreement, which goes into effect immediately in the U.S. and Nordic countries, partners of Irvine, Calif.-based Ingram can include Pickit’s solution as an add-in on all new Office 365 sales at a steeply discounted price.

Ingram announced the new offer at its 2019 Cloud Summit event, which is now underway in San Diego.

Pickit’s subscription-priced solution gives users access to a library of stock graphics and photographs from directly within PowerPoint files. The edition of the system available through Ingram Micro also allows businesses to maintain a second library for internally-created or separately-acquired images.

Every image provided by Pickit is perpetually licensed for use internally and externally both on- and offline. “You can use it for how long as you want to, for however you want to,” Björkholm says. “It’s a super easy way of getting imagery instead of stealing it at Google.”

According to Ingram, Pickit is the number one add-in for Office 365 on the market today. Microsoft itself is presently deploying the solution to its more than 100,000 global users.

Pickit, which is normally priced at $9.99 per user per month, is available to Ingram partners for $2.50 a month instead. According to Björkholm, tacking the solution onto the Business Premium edition of Office 365, which lists for $15 a month, adds about 15 percent to the partner’s licensing cost but can increase their profit by as much as 100 percent.

“It’s a high-margin product,” he says.

Ingram is currently including Pickit in a larger, specially-priced bundle as well. The Bundle IT Up offering matches either Office 365 Business Premium or Microsoft 365 Business (the SMB-focused version of Microsoft’s bundled productivity and management suite) with backup software from SkyKick, file sync and share software from Dropbox, and Pickit at a total price of $20.08 per user a month. According to Ingram, that saves buyers $9.36.

Pickit can generate additional income for partners beyond the licensing revenue, adds Björkholm. “We see a lot of partners now creating services around this,” he says. Those include both initial training and image migration projects and ongoing image bank maintenance services.

Any Ingram partner in a supported country is eligible to tap into the new Pickit alliance and discounted pricing, provided they first download a free not-for-resale version of Pickit’s software and complete an approximately 15-minute onboarding process.

“We want them to use it themselves” before selling it, Björkholm explains.

Ingram is Pickit’s first distribution partner. “Until now, we’ve just been using the Microsoft Store” and selling direct, Björkholm says. “It’s been an individual play, but we know we need partners to reach out to customers.”

The company also needs partners to support its rapidly growing base of existing users, he continues. “We get about a few thousand new companies coming in every month and it’s totally impossible for us to take care of all this on our own.”

ChannelPro 5 Minute Roundup for the Week of July 19th, 2021
END_OF_DOCUMENT_TOKEN_TO_BE_REPLACED

Jabra PanaCast Review - Get Your Huddle On
END_OF_DOCUMENT_TOKEN_TO_BE_REPLACED