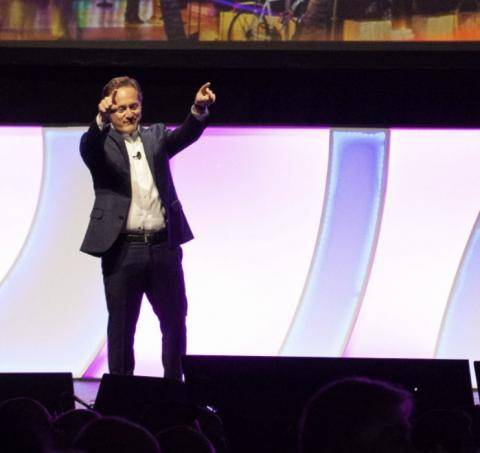 The question is enough on the minds of Ingram Micro and its partners for Victor Baez, the distributor’s senior vice president of cloud channel sales, to have addressed it yesterday during the distributor’s Cloud Summit event in Miami.

“We’re quite comfortable in referring to direct, non-channel go-to-market routes as potentially our largest competitor,” he said during a keynote presentation.

Ingram has little fear of that competition though, Baez continued. While nearly every exhibitor in the conference’s expo hall sells direct at least some of the time, he conceded, that doesn’t mean they believe they’re better off without a channel. To the contrary, most cloud vendors are well aware that deploying as-a-service solutions isn’t as simple as clicking a few buttons, and not something that anyone can do.

“Having a product certification is just not enough,” Baez said. “A validated track record, delivering relevant solutions, that’s what really matters. A direct model cannot do that better than us.”

Indeed, research from IDC suggests that buyers of cloud solutions think so as well. “They project that the indirect channel’s share of software as a service [and] platform as a service revenue will increase from low 30% to almost 40% between 2019 and 2024,” Baez noted. “This means that we are taking share from a direct route in the market at a pretty healthy clip.”

And there’s a simple explanation, he added. “When it comes to managing complexity and enabling growth, the channel is the solution.”

Jason Beal, senior vice president of global channels at AvePoint, a cloud data migration, management, and protection vendor and one of those Cloud Summit exhibitors Baez was referring to, agrees. Though the company still sells directly to customers with more than 1,000 users, it hired Beal late in 2020 partly to take its SMB business 100% indirect.

“I still fundamentally believe in the role of the trusted advisor,” Beal says. “This myth that if a cloud vendor or a SaaS vendor just puts it online, puts it in any one of these marketplaces, end customers are just going to automatically go in, buy it, and know exactly what to do with it throughout its entire life cycle for me is a bit of a fallacy. Don’t confuse the ease of procurement with the ease of implementation and utilization of the software.”

Particularly, adds Paul Bay, Ingram’s CEO, because the average solution the distributor sells includes six software and hardware components. “Think about the complexity of multiple vendors, multiple products, and services wrapped around that,” he says. “We can take that complexity out and make it much more easy and seamless all the way out to the end user on behalf of our channel partners.”

Even businesses large enough to have an IT staff need that help at a time of exceptionally low tech unemployment, notes Beal. “There’s a major talent shortage in our industry right now,” he says. “A vendor might say, ‘hey, we want to go direct’ and customers might not even have the people to both procure and get the stuff to work in their environment.”