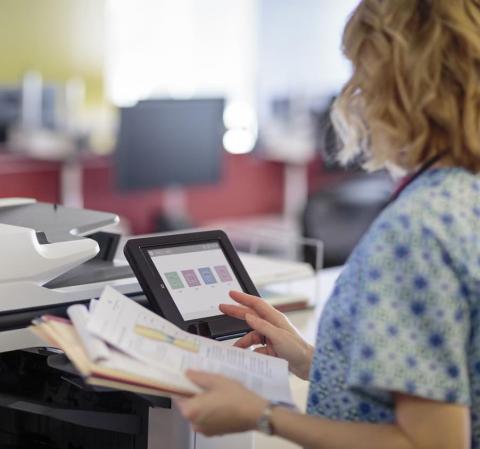 The new offerings include a platform for adding workflow automation apps to multifunction printers, a centralized console for managing MFPs and their apps remotely, and tools for securing that hardware and software. By Rich Freeman
Tweet

“A support desk will take all of this information in multiple languages with follow-the-sun support, giving a four-hour response on software issues and faults,” Birkett says.

According to HP, security was a major consideration for all the new systems it introduced today. Workpath, for example, automatically authenticates users and devices every time someone utilizes the system.

“That ensures that no interference has been conducted,” Birkett says. “The device is the device, the user is the user.” The system verifies the authenticity of Workpath apps at runtime as well.

“It allows our customers who are using traditional security management tools like Venafi and others for PCs to now use those same tools to manage the security certificates on their HP printers and MFPs,” says David Laing, director of future product marketing at HP.

“It allows our reseller partners who are doing consultative selling with their customers to quickly and easily do assessments of a customer’s print security and highlight for them the need for additional security tools like HP Security Manager to keep their fleet secure,” Laing says. Partners can run the tool either from Security Manager itself or from the HP Smart Device Services management solution.

“[That’s] an important stamp of approval required by security management IT teams who are in critical secure environments like governments or government contractors, financial services, and healthcare environments,” Laing notes.

“Our customers are using them a lot for short-run, highly customized marketing materials that they’re providing to their clients, and so we designed these machines to have the industry’s best print quality on both documents with graphics and color images,” Laing says.

Businesses can use HP’s new Custom Color Manager tool with the new printers to recreate the precise color output of previously created documents in new ones. “For customers who have a specific document that they want their printer to exactly match in terms of its colors, we can do that now without requiring them to buy expensive third-party color management tools,” Laing says.