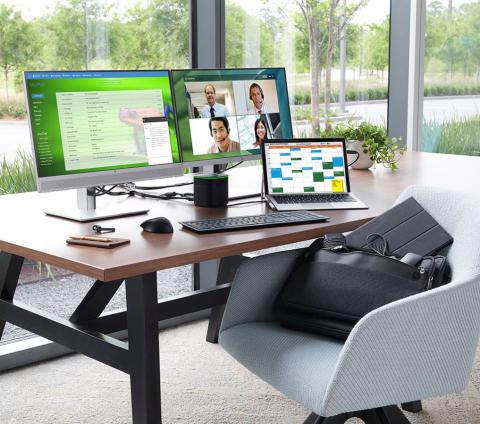 HP has unveiled a wave of PCs and printers for a transformed era of business technology, thrust upon the world this year by the coronavirus pandemic, in which work-from-home computing is the new normal.

Introduced on the same day as a subscription-based hardware and services purchasing program for SMBs, the fresh set of laptops, desktops, monitors, and printers made their debut during HP’s virtual Reinvent partner conference.

All of the devices in one way or another reflect a changed IT landscape brought about by COVID-19 in which once office-bound end users now working from living rooms and kitchens prize compact form factors, portability, and fewer cabled connections.

“When you’re working in your 500 square foot apartment, or … your office has been reduced in its desk size space, having a device that frankly takes up less space and has less wires is super critical,” says Mike Nash, HP’s global head of customer experience and portfolio strategy for personal systems.

Among the new devices designed to accommodate those needs is the HP ProBook 635 Aero G7, a 13.3-in. clamshell that HP says is the world’s lightest AMD-based business notebook and the first to weigh in below a kilogram. Due in November, the thin, all-metal device offers optional gigabit-speed Wi-Fi 6 and 4G LTE connectivity.

Significantly given the current pandemic, the new ProBook is designed to withstand up to 1,000 applications of disinfecting wipes. “You can sanitize with the confidence of knowing that your PC will stand reoccurring cleaning and then be safe for you and your family,” says Andy Rhodes, global head of commercial products in HP’s Personal Systems group.

Pricing for the new device has yet to be established.

Scheduled to arrive in November as well are three ProBook 600 G8 Series notebooks and three ProBook 400 G8 Series models. Billed by HP as the smallest, lightest units ever in the 600 Series product family, the ProBook 630 G8, 640 G8, and 650 G8 feature 13.3-inch, 14-inch, and 15.6-inch displays, respectively, as well as an aluminum chassis, spill-resistant keyboard, and 80% screen-to-body ratio. The devices use 11th Gen Intel Core processors, including a quad-core option, and will sell for $1,169 and up.

The device has three M.2 slots in total, including one for WLAN and two for storage, plus seven USB ports including an optional 100W USB type-C power delivery port. According to Rhodes, its 6.97 x 6.89 x 1.35-inch case and roughly 3.2 lbs. weight make it a fit for users who split time between remote and office work settings.