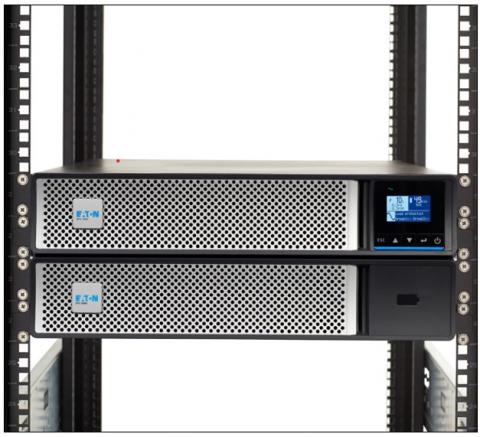 Eaton has introduced an updated edition of its premium 1-3 kVA UPS offering, the 5PX.

Key enhancements in the new unit, dubbed the 5PX G2, include a network card that allows technicians to perform firmware updates and other management tasks remotely. That’s an increasingly critical requirement for organizations with distributed IT environments, according to Rusty Scioscia, an Eaton product manager for single-phase UPS systems.

“IT managers typically have very lean teams, and rolling trucks out to remote sites is a huge time sink and resource waste for them,” he notes.

The new network card, which is an upgraded version of the NETWORK-M2 Gigabit Network Card that Eaton began shipping late in 2018, integrates with Eaton’s Intelligent Power Manager software and its PredictPulse remote monitoring service. According to Eaton, it’s the first UPS connectivity device to meet both the UL 2900-1 and IEC 62443-4-2 cybersecurity standards. “They’re very stringent and very difficult to get,” Scioscia says

Models are available both with and without the new card. The card comes preinstalled in SKUs that include it.

Other remote manageability features in the 5PX G2 include its four outlets with remote load control functionality, arrayed in two banks of two outlets each. “This is critical for cycling unresponsive loads and preventing truck rolls,” Scioscia says. The device has eight outlets in total.

The new device also features an updated edition of Eaton’s advanced battery management technology designed to extend battery life by 50% by charging the cell at different rates based on temperature and load. The new functionality tests batteries every 30 days automatically and delivers predictive notification of impending failures 60 days in advance as well.

Other power-related changes include an 11% power density boost, unity power factor, and enhanced surge protection. The product is Energy Star 2.0 compliant as well.

The new product makes less noise too, according to Scioscia, thanks to its retooled fan and power-efficient design. “At 30% load, the fans are off,” he says. An automated startup configuration wizard is designed to simplify installation.

Available in 2U and 3U form factors, the 5PX G2 features a shallower case that can fit in 18- and 19-inch wall-mounted rack installations.

Units will begin shipping in North America later this month at a wide range of price points. “It’s going to be a little bit more expensive than the prior models, especially given the global supply chain issues that we’re all facing,” Scioscia says, adding that Eaton has taken steps to minimize the impact of the part shortages now plaguing hardware makers of every kind.

“We’re very cognizant of the global supply chain issues and we’ve purchased a lot of inventory,” Scioscia explains. “We’re moving from just in time to just in case.”

Extra functionality in the 5PX G2 compensates for its higher price tag, according to Eaton. “You’re getting a much better value at a relatively similar price,” Scioscia says. All models come with 24/7 technical support and a three-year warranty on both the UPS and its batteries. Buyers can order the system preinstalled in racks.

Eaton unveiled its new LXP-P UPS series for large facilities last November and an updated edition of its 9PX UPS last July. Both products feature lithium-ion batteries that weigh less, are more compact, and require less maintenance than traditional lead acid cells. Eaton’s 5P UPS, a sibling to the 5PX with less functionality, has come with optional lithium-ion batteries since 2019.