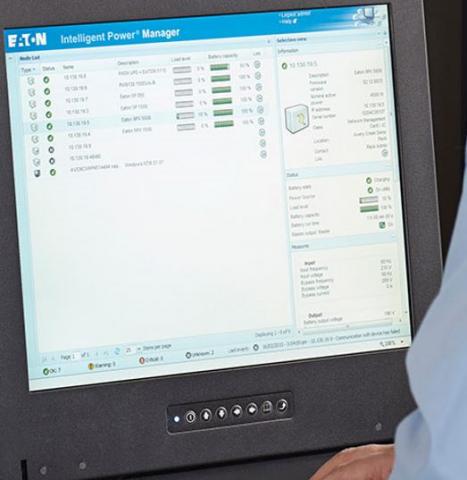 Version 2 of IPM, which is the first major upgrade of the product since its debut nearly 10 years ago, features a wizard-based tool designed to make utilizing the system’s automated policy-based incident remediation functionality simpler for users with limited power management experience.

The new system lets administrators select uninterruptible power supply (UPS) and power distribution unit (PDU) hardware from a graphical map rather than a spreadsheet-like list, as in the original release, and then walks them through the process of defining what steps the system should take under conditions like a power outage.

“It’s much more intuitive,” says Mike Jackson, director of offer management for data center software at Eaton. “We really made it much more streamlined and much easier for them to manage that automation process.”

Technicians can use the same tool to modify remediation processes and link them with one another as well. The ability to shut down physical and virtual devices before the UPS protecting them runs out of battery power is one of IPM’s core capabilities.

The new policy-setting process is one element in a larger interface redesign aimed at making the system simpler to operate. According to Jackson, the new UI is based on the console technicians use to manage Eaton’s network cards. “A lot of the functionality is exactly the same, so we replicated it just to give them a consistent feel across the different components within our portfolio,” he says.

Unlike its predecessor, Jackson emphasizes, IPM 2 lets users organize and present information about power gear and the devices connected to it in graphical, readable formats. “They can actually build out a rack,” he says. “When they’re looking at, say, a remote site, it’s really easy to see what’s in it.”

New as well in IPM 2 is enhanced integration functionality that lets users power down Dell EMC VxRail hyperconverged infrastructure appliances even if virtual resources are still running on the system’s hypervisor. VxRail’s operating system ordinarily prevents applications like IPM from shutting the system off under such conditions.

“We can now talk to the network card of the connected UPS,” Jackson explains, noting that IPM can use the same mechanism to power the appliance up again later.

As before, IPM integrates with hyperconverged and other platforms from VMware and Nutanix, among others, in addition to Dell EMC.

Also as before, IPM 2 comes in three editions, but with new names. Though the entry-level version of the product continues to be called IPM Monitor, the more expansive IPM Basic version is now named IPM Manage, and the top-of-the-line IPM Gold version is now IPM Optimize.

A new pricing model for the solution lets buyers license any edition on a per-node basis, rather than select from SKUs covering a range of nodes. “It gives partners the flexibility to really right-size [IPM] to the application,” Jackson says. “Instead of having a really wide band of 10 to 100 devices or 100 to 200 devices, they can get very specific.”

LG Gram for Business 17 (2020): Big Reasons to Like It
END_OF_DOCUMENT_TOKEN_TO_BE_REPLACED