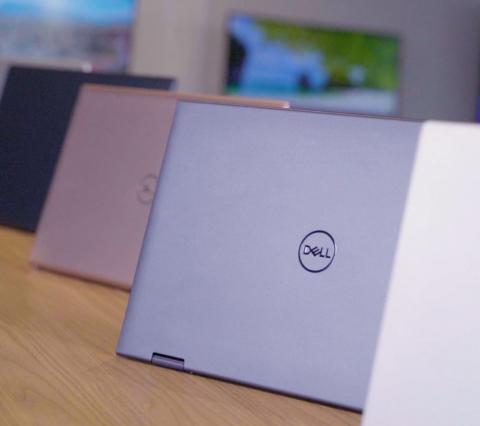 The 13- through 16-inch devices, which include new 14-inch 2-in-1s, come with latest-generation AMD and Intel processors as well as features like enhanced microphones and cameras with improved low-light resolution for better video collaboration. By Rich Freeman
Tweet

Dell has rolled out fresh additions to its Inspiron family of consumer notebooks.

Included among them are a set of 14-inch convertibles powered by latest-generation processors from AMD and Intel. The Inspiron 14 7415 2-in-1 comes either with a six-core AMD Ryzen 5 5500U or an eight-core Ryzen 5 5700U CPU, plus AMD Radeon graphics, up to 16 GB of memory, and up to a 2 TB PCIe NVMe solid-state drive. The new device features a 1920 x 1080 FHD touchscreen display and has a 3.43 lbs. starting weight.

Adoption of 2-in-1 PCs has climbed in the last year as users combining work and leisure on the same device have sought out multi-use form factors, according to Kevin Terwilliger, vice president and general manager of Dell’s Inspiron and Vostro PC lines.

“They’re seeing a greater need for the system to be able to move through laptop, tent, stand, and tablet mode as they adapt to their different needs,” he says.

The larger Inspiron 16 Plus, a 16-inch traditional clamshell laptop, is meant for the “hobbyist creator,” according to Terwilliger. “This product is really designed to help you get immersed into your content,” he says.

The device has a 3K non-touch display that’s 11% larger than the Inspiron family’s previous 16-inch device, plus a 30% larger touchpad, yet is only 5% larger overall. Buyers can choose from a range of 11th Gen Intel Core H-Series processors and configure the unit with up to 32 GB of DDR4 memory, up to a 2TB M.2 PCIe NVMe solid-state drive, and Intel UHD or NVIDIA GeForce GTX or RTX graphics.

New 13-, 14-, and 15-inch Inspirons round out the updated portfolio. All three products feature nearly borderless displays, expanded key caps and touchpads, and a “lift hinge” that raises the keyboard slightly when the device is open for easier typing.

They also come with 11th Gen Intel Core processors; Intel UHD, Intel Xe, or NVIDIA GeForce MX450 graphics; and up to a 2 TB M.2 PCIe NVMe SSD. The Inspiron 13, however, tops out at 16 GB of memory, versus 32 GB on the other products, and offers an optional QHD+ display and optional Intel Optane memory that the other two units lack. The Inspiron 14, unlike the others, has only up to a 1 TB SSD. The Inspiron 15 is the only one of the trio with an optional touchscreen as well as models bearing AMD Ryzen 3, Ryzen 5, and Ryzen 7 processors.

ICYMI: Our Channel News Roundup for the Week of January 23rd, 2023
END_OF_DOCUMENT_TOKEN_TO_BE_REPLACED