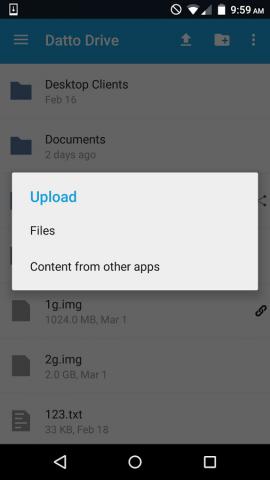 Currently in limited release, its new Datto Drive solution is available free for a year to the first million buyers, and will ultimately sell for just $10 a month per terabyte for an entire end user domain. By Rich Freeman
Tweet

BDR vendor Datto Inc. has taken the first steps of an aggressive foray into the file sync and share market, quietly bringing its new Datto Drive solution into limited release last week at a potentially game-changing price: $10 a month per domain, rather than end user, for a terabyte of capacity.

Moreover, Norwalk, Conn.-based Datto is giving the first million terabytes away free for the first year. In effect now, that offer will be the focus of a major demand generation marketing campaign this summer aimed at producing a million Datto Drive sales leads, all of which will be funneled to the company’s partners.

Datto will also add a premium edition of the product with extra capabilities this summer. Borcherding, who declined to discuss that version’s features or pricing, expects SMBs to regard Datto Drive as a good value even after the one-year promotional giveaway period ends.

“Generally speaking we kind of see file sync and share as a commoditized space, but even for a commodity it can be generally expensive, especially if you have a significant number of seats,” he says.

At a fairly typical $15 per user, Borcherding continues, a 600-employee company like Datto itself would pay $9,000 for file sync and share service every month. Under Datto’s per-domain rate scheme that bill would drop to just $10 per month, assuming one terabyte of capacity is sufficient. Borcherding sees Datto Drive as a potentially rich new source of income for the company just the same.

“Even at $10 per terabyte, if we’re able to do that at scale that could become a significant revenue stream in its own right,” he says, noting that the solution and accompanying marketing campaign will further strengthen the company’s top line by helping partners cross-sell and up-sell other Datto solutions.

“In the end, [we’re] hoping and expecting this to become a very strategic part of our offering going forward,” Borcherding says.

In beta testing since early this year and available for resale to Datto partners immediately, Datto Drive is based on the enterprise edition of file sync and share software from Lexington, Mass.-based ownCloud Inc. that Datto has been offering to buyers of its SIRIS business continuity appliance since last year. Unlike SIRIS, however, Datto Drive is completely hosted in the cloud.

The system has more going for it than its price too, Borcherding emphasizes, including unlimited file versioning and integration with competing platforms that enables MSPs to manage all of the file sync and share solutions their customers use through a single, unified console.

“It’s not as if this was a skunk works project where we just developed code for our own file sync and share product,” he says. “We’ve actually embraced a very mature product, but we’re offering it in a very unique way as a hosted service.”

Borcherding credits Datto’s ability to deliver that service at such a low price to the storage management expertise it’s acquired building and maintaining a backup repository that presently contains roughly 190 petabytes of data.

“We deliver storage very efficiently to the marketplace,” he says, adding that Datto’s pricing strategy for Datto Drive will pressure other file sync and share providers to do the same, and potentially rework their fee structure as well.

“It is a very significant change in the economics of the basic file sync and share offerings in the marketplace, and I think it’ll be really interesting to see how the market reacts and responds,” Borcherding says.