CompTIA Opens Nominating Process for New Women in IT Awards 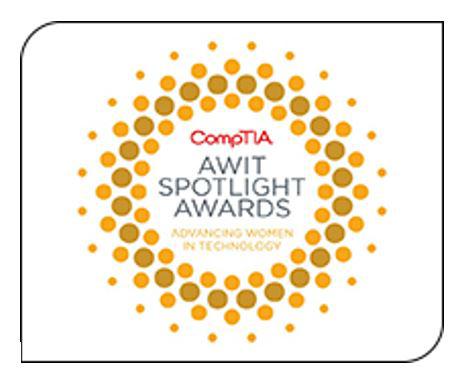 CompTIA has begun accepting nominations for the inaugural edition of a new awards program designed both to recognize women working in IT today and to nurture the next generation of female IT leaders.

Called the CompTIA AWIT Spotlight Awards, the new initiative is sponsored by Downers Grove, Ill.-based CompTIA’s Advancing Women in Technology (AWIT) community, which seeks to encourage women entering the workforce to pursue careers in technology and to help women already in IT advance their careers. Calling attention to women who are making an impact on the IT industry, or have the potential to contribute in the future, is an ideal way to further those goals, according to Nancy Hammervik, CompTIA’s executive vice president of industry relations.

“We’re trying to put these role models, these shining examples, up in front of the industry to inspire [women] and to motivate them,” she says.

Included among the new awards is one named in memory of former ChannelPro executive editor Cecilia Galvin, a passionate supporter of women in IT who passed away last year.

Named the CompTIA/ChannelPro Cecilia Galvin Scholarship Award, it will grant $2,500 to an aspiring technology professional, who can then apply the funds to a four-year college, a trade school, or CompTIA certification courses. Eligible nominees must be high school seniors with a 2.7 or higher GPA who have demonstrated leadership in their school and community as well as an early interest in IT. According to Hammervik, the award is a fitting tribute to Galvin and her legacy as a supporter of young women.

“She embodied everything that AWIT is trying to do, from inspiring the next generation and supporting the next generation to be excited about our industry and pursue careers in this industry; to mentoring those that are in the industry, supporting them, helping them be successful; to [operating] at the highest level of leadership and organizational culture,” Hammervik says. “If other people around her were succeeding, and then she considered herself successful.”

AWIT will distribute three other awards in addition to the scholarship:

According to Hammervik, a shortage of female mentors is one of the top reasons roughly 60 percent of women who begin a career in IT eventually abandon it.

“They don’t have a lot of peers to work with in the organization that they can relate to, and we start to lose them,” she notes. At present, she continues, women account for less than 13 percent of the technology workforce overall.

“Unfortunately, that number’s shrinking and not growing,” Hammervik says.

Nominations for the CompTIA AWIT Spotlight Awards, which can be submitted here, must be completed by June 15th. AWIT’s 11-member executive committee will judge the entries and select the winners, who will be celebrated on July 31st during a ceremony at CompTIA’s ChannelCon event in Washington D.C.

The AWIT Spotlight Awards program joins CompTIA’s existing ChannelChangers awards for future IT leaders. It also fits within larger efforts by CompTIA aimed at getting young people interested in technology careers. Those include the acquisition and subsequent relaunch last year of the Association of Information Technology Professionals, a membership organization for IT technicians and administrators, as well as a more recent alliance with the Technology Student Association, which seeks to get teenagers interested in science, technology, engineering, and mathematics careers.

LG Gram for Business 17 (2020): Big Reasons to Like It
END_OF_DOCUMENT_TOKEN_TO_BE_REPLACED