CompTIA Names Winners of New Women in IT Awards 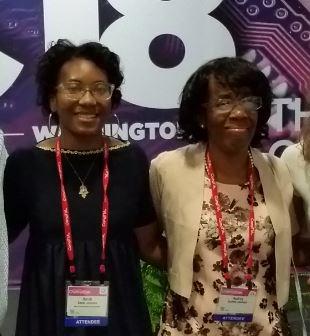 CompTIA has named the inaugural winners of its AWIT Spotlight Awards.

The four honorees were celebrated in a ceremony held yesterday at Downers Grove, Ill.-based CompTIA’s 2018 ChannelCon event, which is currently underway in Washington D.C. They include Sarah Johnson, a recent high school graduate from Philadelphia who received the first CompTIA/ChannelPro Cecilia Galvin Scholarship Award.

Sponsored by CompTIA’s Advancing Women in Technology community, the AWIT Spotlight Awards are designed to encourage women to pursue careers in technology by calling attention to role models already making an impact in the industry. At present, women account for 47 percent of the U.S. workforce and 57 percent of U.S. college graduates, yet just 25 percent of U.S. IT employees, according to data from IDC.

“You can’t be what you can’t see,” noted AWIT chair Cristina Greysman, who is also vice president of partner recruitment and activation at SAP. “To put a more positive spin on it, seeing is believing.”

The goal of the Cecilia Galvin Scholarship Award in particular, which includes a $2,500 grant, is to help a talented young woman with an interest in technology launch an education in IT. It is named after former ChannelPro Executive Editor Cecilia Galvin, who passed away last year.

“We wanted to provide support for a woman who would like to begin a career in technology,” Greysman explained. “We know how important that is, to get started on the right foot.”

Sarah Johnson (pictured left with her mother Audrey Johnson, who home-schooled her) is exactly the kind of person the AWIT leadership team had in mind for the award. A frequent participant in prestigious science and engineering fairs with a trophy case full of medals, she’s been fascinated by technology since kindergarten.

“I was really interested in finding different ways that things work and taking apart different things around the house,” she says.

That led to experimentation in robotics beginning in the sixth grade, and more recently to her invention of two GPS devices, one of which helps parents locate lost children. Built around a portable sensor, the system communicates its longitude and latitude via SMS messaging when queried by anxious parents. Johnson spent the better part of a year researching the unit’s engineering and components.

“It had to be affordable, because I knew my product had to be available to people who probably couldn’t pay $200 for a tracking device but still wanted to keep their child safe,” Johnson says.

Her other device, which is designed for use with people suffering from dementia, automatically sends a text message any time someone wearing it strays outside the perimeter of a home or assisted living facility.

Johnson has also been an active participant in TechGirlz, a Philadelphia non-profit and former CompTIA charitable grant recipient that encourages young women to cultivate an interest in IT. She has served the group as a technical teaching assistant and mentor to other young women with a passion for technology.

Johnson begins her freshman year at the New York Institute of Technology, in Manhattan, shortly. She plans to pursue a career as a hardware product designer.

“I don’t want to just be a part of the future. I want to invent the future,” she says.

Nominations Are Open for CompTIA's Cecilia Galvin Scholarship
May 17th, 2021

ChannelPro SMB Forum Back on the Road in Dallas
June 10th, 2021
CompTIA Forecasts a Return to Acceleration, Innovation and Strategy for the IT Industry in 2022
November 17th, 2021

LG Gram for Business 17 (2020): Big Reasons to Like It
END_OF_DOCUMENT_TOKEN_TO_BE_REPLACED