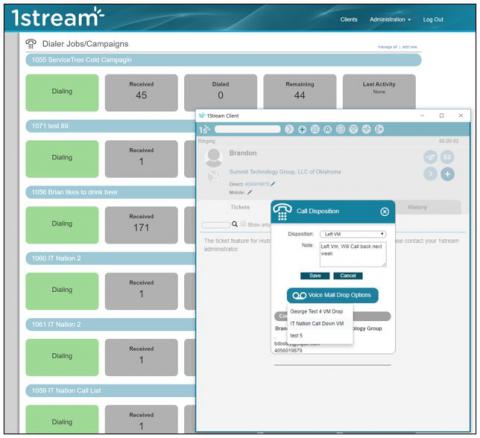 BVoIP has updated its unified communications platform’s “power dialer” functionality and rolled out additional updates for its 1Stream integration platform.

Enhancements to the tool, which reached users gradually during the weeks following the system’s debut, include the ability to link call campaigns to several different CRM products at once. The original application limited users to one platform only.

“People are using multiple tools for multiple reasons, so now with the dialer you can pull lists from multiple CRMs in the same place,” says George Bardissi, BVoIP’s CEO. Users can also push data collected during dialer jobs back out to those same CRM solutions.

A further addition to the power dialer tool allows companies to import calling lists via .csv files, instead of relying solely on CRM data. Users working together on a campaign can also jump into a colleague’s dialing list now, to pick up where they leave off at the end of a shift or help them complete the list faster. “They can kind of pitch in on efforts as they’re available,” Bardissi says.

1Stream refinements include an update to the click-to-dial app for Datto’s Autotask PSA solution that lets users running that system in the Chrome browser call people associated with a ticket or other item automatically by clicking an icon next to their number. Earlier versions of the app required users to select a number from a dropdown list instead. “You had to go digging for the live links in certain cases, which created extra clicks,” Bardissi notes.

“All we’re trying to do is take less time to get to people who solve problems,” Bardissi explains.

“Maybe accounting wants the PSA screen pop and QuickBooks Online, versus the help desk team, which wants their PSA, RMM, and documentation, versus the sales team that may only want their CRM to pop,” Bardissi says. “Now you can get super granular based on role and based on department within the company.”

BVoIP has been releasing continuous, incremental improvements to all of the products in its portfolio, rather than large occasional upgrades, throughout 2020, which Bardissi has referred to in the past as the company’s “year of updates.”

LG Gram for Business 17 (2020): Big Reasons to Like It
END_OF_DOCUMENT_TOKEN_TO_BE_REPLACED