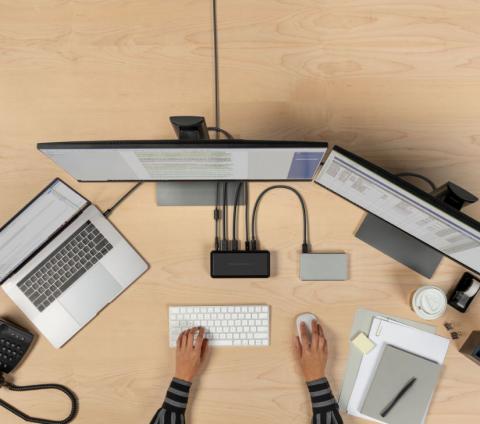 Both the Thunderbolt 3 Plus Dock and Thunderbolt 3 Pro Dock are designed to let companies that use “desk hoteling” rather than assigned workspaces support a diverse range of notebooks through a single compact piece of hardware. By Rich Freeman
Tweet

Belkin has introduced two Thunderbolt 3 docks optimized for corporate offices and coworking spaces that use temporary “desk hoteling” rather than assigned workspaces.

Both the Thunderbolt 3 Plus Dock and Thunderbolt 3 Pro Dock allow employers to accommodate a diverse range of notebooks through a single piece of hardware, according to Jon Roepke, Belkin’s director of product management.

“No matter what device you bring to that desktop, it would work perfectly with multi-monitor and peripheral attachment through a single cable connection,” he says.

The new products arrive at a time of mounting interest in shared workspace arrangements among businesses seeking to maximize utilization of increasingly expensive office space. According to Belkin, citing data from commercial real estate agency CBRE, some two-thirds of companies worldwide plan to implement “hot desking,” as hoteling is also known, by 2020.

“Clearly that’s a growing trend within the workforce today,” says Roepke, adding that it also poses a problem for companies in which employees use both PCs and Macs. “Historically, a single dock could not deal with the different operating systems or technology associated with those devices.”

Belkin’s new docks, by contrast, are compatible with devices running either Windows or MacOS, and support both Thunderbolt 3 and USB-C connectors. Both units can power two 4K displays at 60Hz or one 8K display at 30Hz as well.

The mainstream Thunderbolt 3 Plus Dock, which is due to reach market in November, comes with three USB-A 3.1 ports, two USB-C 3.1 ports, and a single Thunderbolt 3 port, along with Gigabit Ethernet, two DisplayPort connections, an audio in/out port, and 60W of upstream charging. It will list at $249.99.

The higher-end Thunderbolt 3 Pro Dock, which ships next month, offers four USB-A 3.0 ports and two Thunderbolt 3 ports, along with one USB-A 3.1 port and a USB-C 3.1 port. Unlike the Thunderbolt 3 Plus, it also features 85W upstream charging, an SD card reader, and a vertical mounting option.

Slightly more expensive than the Thunderbolt 3 Plus at $299.99 MSRP, the faster Thunderbolt 3 Pro is targeted at users doing IO-intensive work like video editing, as well as premium buyers seeking maximum performance.

“While I’m not drawing a lot of graphics, I definitely want power at my fingertips, and this is the one that I would buy,” Roepke says.

Both units feature compact footprints suited to today’s smaller corporate workspaces. “Price per square foot is only getting more expensive, thus desktop surface area is also shrinking in alignment with that,” Roepke notes.

For channel pros, he continues, the Thunderbolt 3 Plus and Pro offer opportunities to add revenue and profit to sales of both laptops and complete hoteling workspaces. “We definitely see this as being an integral part of an attach or solution sale,” Roepke says.

Belkin’s latest docks, which were unveiled three months after the debut of the company’s USB-C Multimedia Hub, Thunderbolt 3 Dock Mini, and Thunderbolt 3 Cable, won’t be its last products tailored to the needs of today’s changing workforce.

“With the increase in USB-C technology and Thunderbolt 3 technology, our focus is on docking technology that may lend itself more to the complete mobile workforce,” hints Roepke, without citing specifics. “Get ready for more.”