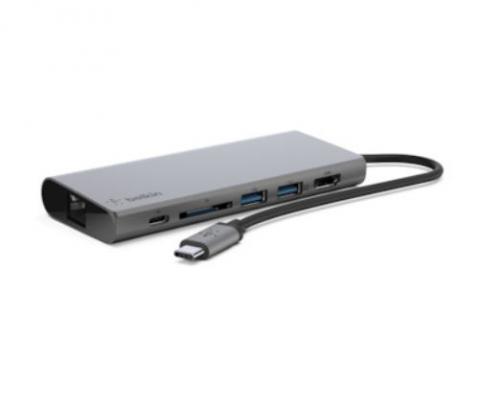 The new offerings, which debuted during the 2019 InfoComm pro AV conference this week in Orlando, all feature compact form factors to accommodate people on the go, according to Jon Roepke, Belkin’s director of product management.

“They are configured for a mobile workforce,” he says. “Size does matter in these circumstances.”

Belkin’s new USB-C Multimedia Hub aims to help users compensate for the limited connection options in the latest thin and light notebooks, which often offer only a couple of USB-C ports. The system lets users expand one of those ports to accommodate USB-A, HDMI, and Ethernet cables, as well as SD memory cards.

“[It] basically regenerates the ports that you love and cherish off of your typically older laptop configurations and gives you the power to get those back in on your USB-C or Thunderbolt 3 laptops,” Roepke says.

Available now, the device supports transfer speeds up to 5 Gbps and provides up to 60W off pass-through power. It lists for $99.99.

Belkin’s new Thunderbolt 3 Dock Mini provides similar connectivity for HDMI 4K, USB-A 3.0, USB-A 2.0, and Gigabit Ethernet cables in a portable form factor. Compatible with both Windows and Mac hardware, it’s capable of supporting dual UHD 4K displays at 60Hz. The product is due to reach market next month, and well sell for $199.99

The third new Belkin product is a Thunderbolt 3 cable engineered to take advantage of the latest spec for that standard. Available in 0.5 and 0.8 meter lengths, it provides 40 Gbps transfer speeds and supplies up to 100W of power without assistance from an additional power supply. Belkin’s earlier Thunderbolt cables supported 60W. The shorter version lists for $29.99, while the longer one sells for $39.99.

Belkin is showcasing its Multiport to HDMI Digital AV Adapter at InfoComm as well. As ChannelPro reported earlier, that device is designed to make utilizing conference room resources easier for meeting goers by consolidating eight different connectors in a single unit with a small footprint.

“They simply plug-and-play the connector of their choice,” Roepke says. “No software, no fumbling with sources, no worrying about forgetting the adapter or bringing along adapters to a conference room environment. It really makes connectivity to those projectors and displays so much easier.”

Also on display at InfoComm this week is Belkin’s BOOSTUP Wireless Charging Spot. An alliance agreement between Belkin and wireless charging platform vendor Chargifi Ltd. announced in January turns Chargifi’s cloud-based solution into a centralized point of control for BOOSTUP devices. Belkin expects a range of third-party developers to utilize that integration in the near future in solutions that automatically reserve meeting rooms, switch on videoconferencing systems, adjust smart lighting and thermostat settings, and more when wireless charging is initiated.

“Now that these wireless charging spots are connecting wirelessly to cloud architecture you can unlock and develop very novel IoT experiences associated with placing your mobile device on a charging pad,” Roepke says.

Belkin is the “connected things” division of the business created from the merger of Belkin International and Foxconn Interconnect Technology last fall.