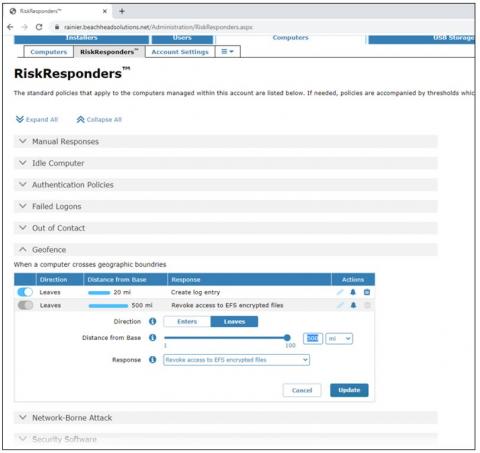 Called RiskResponder, the new tool is designed to give MSPs an intuitive, consistent way to act on an expanded list of security dangers that now includes invalid remote desktop connections and disabling local security tools like Microsoft Defender. By Rich Freeman
Tweet

Beachhead Solutions has added a new automated risk mitigation console and new security controls to its BeachheadSecure for MSPs solution.

Called RiskResponder, the tool is designed to offer users an intuitive, consistent way to set thresholds for a variety of security dangers and define how the system responds when those limits are exceeded. The result is “sort of a simplified, easy to manage EDR,” according to Cam Roberson, Beachhead’s vice president of sales and channel development.

RiskResponder is available now at no extra cost to users of the premium edition of BeachheadSecure for MSPs.

Utilizing sliders on the system’s interface, administrators can define how many invalid login attempts, for example, should trigger a mix-and-match combination of preset responses such as logging the event, notifying the help desk, running a script, quarantining the affected endpoint, shutting the machine down, or showing its user a warning message.

“It gives them complete flexibility to address risks as they see fit immediately, and without their intervention if they’d like,” Roberson says.

Other conditions the tool can watch for include how many days have elapsed since a device has last connected to the internet and whether or not a device has strayed beyond a prescribed location. That “geo-fencing” functionality became part of BeachheadSecure last October.

All of RiskResponder’s controls can be applied against PCs, Macs, USB sticks, mobile phones, tablets, and Windows servers.

“RiskResponder is a game-changing solution that significantly simplifies and customizes the control we have over keeping clients’ devices and data secure. The capabilities also enable us to work collaboratively with our clients and to be crystal clear on what specific actions trigger what result,” says Eric Weast, owner of Deerfield Beach, Fla.-based MSP and solution provider ECW Network & IT Solutions, in remarks supplied by Beachhead to ChannelPro. “It enables us to deliver complete transparency and peace of mind to our clients.”

According to Roberson, RiskResponder also features a recalibrated alert engine designed to notify technicians only about threats that require immediate attention. “There will be much less noise around what we’re alerting on, and we’ll give them the ability to alert on what they believe is important to them,” he says.

Beachhead plans to add further controls to RiskResponder in conjunction with a longer-term effort to turn BeachheadSecure from a tool for deploying and orchestrating encryption and compliance on PCs into a broader automated threat detection and remediation platform. Changing the name of the product from SimplySecure for MSPs to BeachheadSecure for MSPs this January was an early step in that process.

“Ultimately, our product is moving more towards a robust, comprehensive endpoint security tool and EDR in a very easy to understand, easy to set approach,” Roberson says.