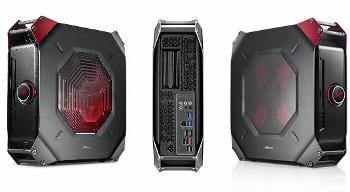 ASRock Inc. has released its Intel 8 Series gaming rig -- the M8. Striving to create a gaming PC that motivates gamers "to start their engines, put the pedal to the floor, and enjoy the adrenaline rush," ASRock has collaborated with BMW Group subsidiary DesignworksUSA to build this futuristic and fast-paced gaming PC.

On its exterior, anodized aluminum and steel is used for its streamlined design, while hidden magnets hold the whole case together. Both sides of the case is partially transparent, so that the motherboard and components inside are ambiguously visible. Inside the box lies a Z87 mini-ITX motherboard for portability and space efficiency. The M8 is sold as a barebone system so that gamers have the freedom of choosing their own components, such as swappable DDR3 DIMMs, any standard PCIe x16 graphics card, and also has 6 SATA3 ports lined up for storage.

"Our goal was to create desirability and iconic differentiation in a small Gaming-PC," says Sonja Schiefer, director, Munich Studio, BMW Group DesignworksUSA. "To enhance the perception of pure power we created a design language focused on superlative and a design solution that is very much an exaggerated mode of expression."

"We've put in lots of effort to make this new mini-ITX gaming rig work both in its appearances and hardware build. Finally, gamers are allowed to own a real gaming PC that looks awesome and performs like a champ!" says James Lee, vice president of ASRock sales and marketing.

ASRock is giving away free XSplit three-month premium licenses (a $24.95 value) for gamers who wish to do live broadcasting while gaming. More information about the M8 gaming PC is available at www.asrock.com.

ICYMI: Our Channel News Roundup for the Week of January 23rd, 2023
END_OF_DOCUMENT_TOKEN_TO_BE_REPLACED