The Long View on Smart Glasses 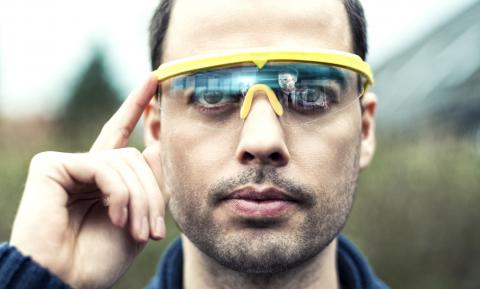 Smart glasses for B2B have been increasing under the radar for industrial and field use, with opportunity for integration with other services and systems. By Jennifer Oladipo
Tweet

THE BOOM never really came, but neither did a bust for smart glasses. Instead, the market is on a steady rise, expected to increase just over 14% from 2021 to 2025, with 61% of that originating from North America, according to research from Technavio.

That’s not much compared to the hype back in 2014 when Google debuted Google Glass, but it does represent a solid business opportunity for channel pros. Major drivers for smart glasses, or smart eyewear, are coming from industry and consumers. While augmented reality gaming among individuals normalizes head gear, automation in the industrial sector has shown the technology’s lasting usefulness. Additionally, North America will be the fastest growing region for smart glasses, according to the Technavio report, largely due to communications network advances such as 5G speeding the performance of edge devices.

Though we all remember the swift backlash against Google Glass use in public places, the smart glasses never died on the B2B side.

Percy Stocker, executive vice president of AR Americas at TeamViewer, says that while he’s seen several devices come and go over the years, smart glasses have been consistently operating under the radar since they first came on the market. TeamViewer provides cloud-based connectivity among various systems and devices for companies including Yeti, Unilever, Energizer, and drug maker GlaxoSmithKline—all of whom use smart glasses for warehouse picking.

“The assumption that it’s a total fail is wrong,” says Stocker.

Automaker Daimler and international shipping company DHL were among early, and continuing, adopters. They illustrate the main sectors where smart glasses are used today:

What’s the biggest factor in adoption? In a way, it’s style.

“In the evolution of the smart glasses that I’ve seen, the most important aspect is the ergonomics, because people will use products that they Iike to use,” says Stocker. Early models focused on field of view and ignored comfort. Vendors overlooked basic issues such as how smart glasses might conflict with people’s prescription eyeglasses.

Additionally, today’s buyers are thinking more about the ecosystem to which the glasses connect. A pure hardware sale will be quicker and easier (and smaller), but that’s like having a phone with connectivity and no app store, says Stocker. Buyers increasingly are shopping for hardware-software packages as they become better educated.

ICYMI: Our Channel News Roundup for the Week of January 23rd, 2023
END_OF_DOCUMENT_TOKEN_TO_BE_REPLACED