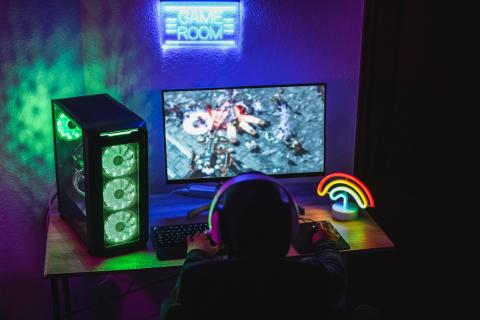 Intel predicts every person will need zetta-scale computing for the metaverse. By James E. Gaskin
Tweet

THE METAVERSE IS COMING. Whether it revolutionizes the world or struggles to gain traction, there’s one thing experts, especially those at Intel, agree on: Every person in the metaverse will need far more compute power than they have today. How much more? 1,000x. Per person.

How will we get there? By repurposing some of the tools we have today, says Jon Bach, president of Puget Systems, a custom builder of workstations for creators located in Auburn, Wash.

Gaming PCs were developed to render the best possible video and sound environments for game play. Those same tools may soon power virtual reality applications and eventually the metaverse.

Raja Koduri, Intel’s senior vice president and general manager of the accelerated computing systems and graphics group, outlined a plan for powering the metaverse last December in a post and demo video. The goal is to “decouple user experience from the confines of specific hardware,” he said. In other words, share resources across a network.

Intel's “continual compute” initiative, which aims to let multiple PCs share an external GPU over the network, is part of its strategy for realizing that goal. At the company’s Vision 2022 event in May, Koduri conducted a demo during which a standard laptop played a modern game with the expected results of lower video definition and jerky movements. When the continual compute infrastructure engaged, the laptop used the graphic resources of a gaming PC across the stage, resulting in full 4K graphics and smooth flying and rendering. Koduri claimed this level of performance will be the lowest bar for the metaverse in four or five years.

The same tools can power artificial intelligence programs and neural networks, he added. “A new neural net needs to double its compute power every three to four months,” Koduri said.

Though the continual compute infrastructure draws on locally networked gaming PCs, he added, it could utilize resources across the cloud in the future.

For some time, vendors have worried that workstations will disappear because of the cloud, but that’s not happened yet, Bach notes. “Lately, the move has been to the edge of the cloud, and this makes workstations and gaming PCs edge cloud engines.” The more you can share their resources, he adds, the better.