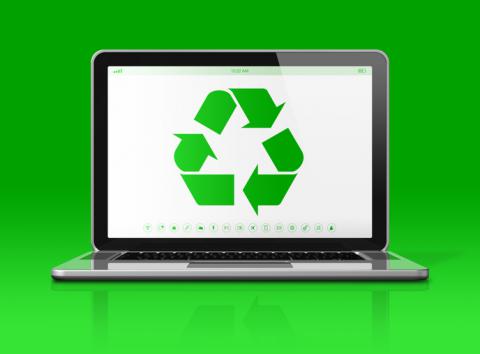 MSPs and others are giving computing devices a second life—and helping the community, their customers, and ultimately the planet in the process. By Colleen Frye
Tweet

ONE HUNDRED. MILLION. TONS. That’s how much global e-waste the world will have by 2050 if trends continue, according to a report from the United Nations and the Platform for Accelerating the Circular Economy, which also states that less than 20% of e-waste is formally recycled. In the channel, however, some MSPs and others are giving computing devices a second life by e-cycling for charity—and helping the community, their customers, and ultimately the planet in the process.

Tekie Geek, an MSP in Staten Island, has been refurbishing and donating e-cycled technology to local schools and not-for-profit organizations for the past several years. The company doesn’t charge a disposal fee for customers willing to donate equipment, according to President Geek Mike Bloomfield. In addition, Tekie Geek has clients sign a form agreeing to the donation.

“The benefit for a business is, who wants to take the time to sell the hardware? It's not worth it. With donations, you’re giving back to the community, and also your accountant is able to work with you and do a tax write-off.”

It’s a win for the environment too, according to Scott Hobin, CEO of Hula Networks, a networking hardware VAR in San Jose, Calif. “We're trying to avoid as much electronics going to landfills as possible and having them be used as long as we can … this is just another message of doing something that we feel is right.” Hula Networks refurbishes donated technology for a local elementary school, its staff, and parents. The VAR handles all the logistics and reimburses shipping charges for its customers.

Tekie Geek accepts both broken and working equipment, primarily computers, workstations, and monitors, and typically stays away from old keyboards, mice, and printers. The local high school, of which Bloomfield is an alumni, has a Career and Technical Education program that teaches computer repair and is happy to receive broken systems.

“We destroy any hard drives the proper way, but we'll give them the machines completely,” says Bloomfield. “So we get bad hardware, bad screens—they want it just to work on.”

For functional equipment, Tekie Geek properly wipes the hard drives. “You’ve got to make sure you're not handing off HIPAA data or client data,” Bloomfield stresses.

That prep work takes about a half-hour of time per machine, but Bloomfield’s happy to contribute to the community. Tekie Geek will also reinstall existing Windows licenses for nonprofits on the donated equipment. “Someone's garbage is another person's gold,” he says. “So especially in the not-for-profits and the schools where they could really use the equipment, why not?”

Jabra PanaCast Review - Get Your Huddle On
END_OF_DOCUMENT_TOKEN_TO_BE_REPLACED